When bigotry makes a mockery of truth

Just Mercy tells the real-life story of an Alabama black man who's wrongly sentenced to death. 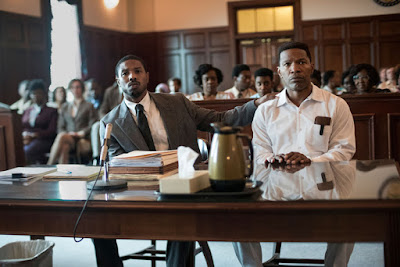 If Just Mercy, director Destin Daniel Cretton>'s big-screen adaptation of Bryan Stevenson's book of the same name, doesn't move you, I'm not sure what could.

Just Mercy qualifies as the straightforward story about a persistent, Harvard educated attorney (Michael B. Jordan) who moves to Alabama in the 1980s to head a project devoted to representing inmates on death row, as well as others who can't afford legal help.

One of the attorney's clients (Jamie Foxx) has been sentenced to death despite a jury's determination that he deserved life in prison. A shoddy defense completed the frame-up. Foxx's Walter McMillan - a.k.a. Johnny D -- was accused of killing a teenage white girl and the white community in Monroeville — the town where Harper Lee wrote To Kill a Mockingbird -- hungered for someone to punish.

Just Mercy may not brim with groundbreaking insights about racism but it makes us feel the sting of injustice with performances that embody so much determination, pain and emotional truth that the movie rises above anything that might be deemed routine.

Cretton (Short Term 12) charts a course that explores the deep humanity of black Americans who have been wronged by a system that's rigged against them. As Foxx's character says at one point, he was born into a society that regarded him as guilty at birth.

Jordan (of Creed and Black Panther fame) can dominate a scene if he chooses. Here, he avoids any pyrotechnics in playing a young Harvard Law grad who isn't entirely sure of himself but who has decided that there's little point in being a lawyer if the fight for justice isn't at the heart of his practice.

Jordan's Bryan Stevenson can't always approach his work dispassionately. As a young black man, he not only wants to fight injustice; he feels the weight of it. He arrives in Monroe County where Eva Ansley (Brie Larson) has been working as operations director of the Equal Justice Initiative. Although she's not a lawyer, Ansley devotes herself to doing everything in her power to facilitate Stevenson's work.

The movie's themes are embodied in a cast that revolves around Jordan. As a death-row inmate, Foxx can be imposing in his mistrust of the system and tender in the way he helps to calm a fellow inmate (a terrific Rob Morgan) on the eve of his execution.

In some ways, Richardson's story resonates more powerfully than Johnny D's. A Vietnam veteran, Richardson was responsible for a woman's death. He can't escape the burden of his guilt. At the same time, it's clear that this victim of war-related post-traumatic stress doesn't belong on death row. As one inmate puts it, he should be hospitalized.

It's heartbreaking to hear Richardson say that the way people treat him on the day of his execution -- asking if there's anything they can do to help -- is the nicest anyone's been to him in his entire life. When the guards lead him out of his cell, he politely asks permission to say goodbye to his friends, fellow inmates on death row.

It's difficult to imagine a more convincing portrait of a man who has been battered and beaten by the world and by the torment of knowing that he veered out of control.

For his part, Foxx completely inhabits the role of a man who knows he's innocent but who also understands that no one cares. When truth doesn’t matter, cynicism is the inevitable result. Tough and guarded, Walter has adjusted to death row in the only way possible: He expects nothing from anyone.

It falls to Tim Blake Nelson to give a key performance as the convict whose false testimony condemned Johnny D. His face contorted from burns experienced as a kid in foster care, Nelson's account of how he was coerced into lying in court proves chilling.

Cretton chronicles the legal maneuvering required to try to win a new trial for Johnny D. But it's the clearly expressed human toll taken by a corrupted system that creates the movie’s emotional engagement. Cretton allows the movie's ending to go on too long, but even that can't dull the heartbreak of a story about bonds formed by people -- who in a more just world -- never would have met.