A dachshund and people in pain 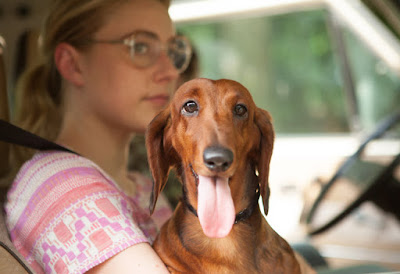 I've never been particularly enamored of director Todd Solondz's vision of a suburban America dominated by cruelty, isolation and sometimes criminality. And with Solondz's Wiener-Dog, a movie named for the main character of his 1995 breakthrough, Welcome to the Dollhouse, Solondz's worldview seems no more appealing.

Wiener-Dog isn't one evolving movie, but four vignettes united by the presence of a dachshund in each one of its unhappy tales, as well as by a pervasive sadness that runs against the tide of Solondz's attempts at satirical humor.

One of the characters in Wiener-Dog is a failed screenwriter named Schmerz, a not-so-subtle reference to the Yiddish and German words for pain. Deeply felt emotional pain provides the fuel that keeps Wiener-Dog's engine sputtering.

In the first episode, an insensitive father (Tracy Letts) brings Wiener-Dog home for his son, a kid who has battled cancer. The boy's mother (Julie Delpy) doesn't want a dog in the house, but acquiesces when the father insists.

The emotion of the piece centers on the boy (Keaton Nigel Cooke), a cute kid whose every line of dialogue sounds like the plaintive cry of an innocent who's about to be trampled. The boy, I suppose, embodies the movie's suffering soul.

Despite his generous gesture toward the boy, the father is brusk and insensitive; the episode ends cruelly when Wiener-Dog is taken to a veterinarian to be euthanized.

Here is Solondz in brief: The insensitivity of parents toward both boy and animal stands as a form of contemptible self-absorption.

In the next episode, the character played by Heather Matarazzo in Solondz's first movie, re-emerges as an adult, this time played by Greta Gerwig.

Gerwig's character winds up taking a trip with a former high school classmate played by Kieran Culkin, a drug-dealing young man who visits his brother, who has Down Syndrome and is married to a woman with Down Syndrome. This time, Wiener-Dog's name has been changed to Doody.

The movie includes a faux intermission in which Solondz's grim misanthropy contrasts with an upbeat presentation reminiscent of the interludes once found in bygone drive-in theaters.

The intermission gives way to episode three, which revolves the aforementioned Schmerz (Danny DeVito), a sad sack of a man who's teaching screenwriting at a college and who is regarded as useless and unhelpful by most of his students. The hapless dachshund becomes part of Schmerz's desperate revenge plot.

By the last episode, the dog's name has changed to Cancer, a pretty good indication that things will continue to go badly. Ellen Burstyn plays Cancer's owner, a sour woman who's visited by her granddaughter (Zosia Mamet). The granddaughter wants money to help support her hostile artist boyfriend (Michael Shaw).

Animal lovers, especially dog lovers, will recoil at the way Solondz brings his not-so-shaggy dog story to its conclusion.

What troubles me about Wiener-Dog has less to with its cruelty -- perhaps not as extreme as what we saw in movies such as Happiness (1998) -- but with its pro forma rendering of Solondz's mostly cheerless reality.

Wiener-Dog leads Solondz into a creative cul-de-sac in which neither real drama nor comedy can flourish. It felt to me that in each of these stories, only one outcome was possible: More misery for both the dachshund and its temporary owners.