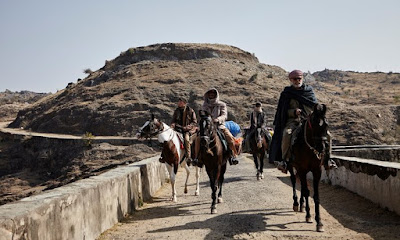 If nothing else, Les Cowboys -- the first directorial effort from French screenwriter Thomas Bidegain -- deserves to be called ambitious.

In a single, sprawling movie that covers 15 years, Bidegain addresses cultural oddities, Arab immigration, the breach between Europeans and Muslims, the seduction of Europeans into Islam and the furious dedication of a father who won't abandon the search for the 16-year-old daughter who has run away from home with a local Arab.

Despite this overload of issues, the movie manages to tell an involving story that takes us into the pre-9/ll back alleys of European cities that are beginning to be filled with Muslim immigrants and into the wild, open spaces of Pakistan.

But all that comes after a beginning that looks as if Les Cowboys might be a rousing comedy about a group of Frenchmen who have taken up the ways of the West. These folks don cowboy hats and boots, ride mechanical bulls, sing country songs and square dance. They seem pretty happy with their assumed identities as cowboys in France, and they meet regularly to act out their fantasies.

At this point, the movie focuses on Alain (Francois Damiens), an imposing bear of a man who takes the stage at one of the group's Western gatherings to sing Tennessee Waltz.

Before the day ends, Alain's happy life will be turned upside down. His 16-year-old daughter Kelly will have vanished.

When it becomes clear that Kelly has left home voluntarily and in the company of a local Arab boy, Alain becomes consumed with the task of locating her, a goal that takes him into hostile territories -- from tough Muslim neighborhoods in Antwerp to shabby trailer parks where groups of Muslims live and even to Yemen.

On most of these outings, Alain travels with his young son.

This part of the movie has been compared to John Ford's The Searchers -- and not without reason. But Les Cowboys eventually becomes something else, focusing on the adventures of Alain's grown son (Finnegan Oldfield), who picks up the search years later.

I'm leaving out a lot, of course, but for good reason. The movie's many plot twists, some arriving after 9/11, are best discovered in a theater.

I will tell you, though, that John C. Reilly pops up as a rogue who trades money for hostages in Pakistan. He convinces Oldfield's character, who by this time is serving as an aid worker in Pakistan, that he may be able to help find the young man's sister.

Bide gain has written screenplays for Jacques Audiard's A Prophett, Rust and Bone and Dheepan, not bad preparation for a filmmaker striking out on his own, and after Les Cowboys, most of us will want to see more from a filmmaker who's not afraid to engage volatile issues.