The Wailing is one howl of a movie. 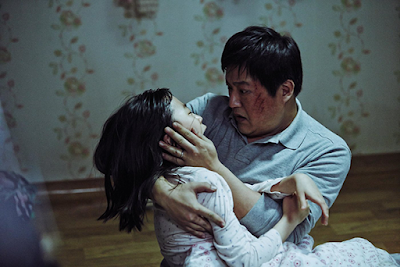 Welcome to a small South Korean village where the police tend toward bumbling incompetence, where almost every day is accompanied by punishing rains and where one gruesome murder follows another.

This may sound like the basis for a darkly hued thriller, but The Wailing qualifies as a worthy addition to the growing and well-respected genre of South Korean horror. Director Na Hong-jin has made a movie that's grisly, disturbing and full of horror ploys (from demonic possession to brutal murder) that expose the vulnerability of ordinary people to forces they never really understand.

The story centers on Jong-goo (Kwak Do-won), a policeman who's not likely to be confused with Sherlock Holmes. A bit dim and obviously out-of-shape, Jong-goo helps investigate a horrific murder.

Jong-goo may not be much of a cop, but he loves his affectionate daughter Hyo-jin (Kim Hwan-hee). Understandably, no one can figure out what's going on with Hyo-Jin when she suddenly turns into a sneering, uncontrollable child.

Before long, the village indulges its suspicions about a Japanese man (Jun Kunimura) who lives in a hovel outside of town and owns a vicious black dog. Is this man a demon who has possessed Hyo-Jin and others or is he the victim of some lingering prejudice against the Japanese?

Gradually, Jong-goo accepts the idea that the Japanese loner is a demon who's intent on creating bloody mayhem in a rural town that looks idyllic only when seen from a distance by cinematographer Hong Kyung-pyo's camera.

Exasperated by his inability to help his daughter and pressured by his mother-in-law, Jong-goo hires a shaman (Hawng Jung-min) who insists that only the most extreme form of exorcism will put the Japanese demon to death. The exorcism turns out to be an orgiastic ritual in which animals are slaughtered, nerves are rattled and the stakes feel cosmic in scope.

Our search for the reasons behind what's happening to this particular village prove futile. Could Na be telling us that there's an alarming randomness to the way evil finds its victims?

In the end, Jong-goo must make a decision that could prove fatal to his daughter. Jong-goo's ability to trust plays a central role in the movie's outcome. But even here we realize that Jong-goo has no real basis on which to make the choice that leads to the movie's horrific conclusion.

That's the real horror of The Wailing: In the face of a situation in which powerful forces conspire to wreak havoc, there may be no defense at all.