Women vs. ghosts, no winners

If you thought a female version of Ghostbusters would save the summer, think again. 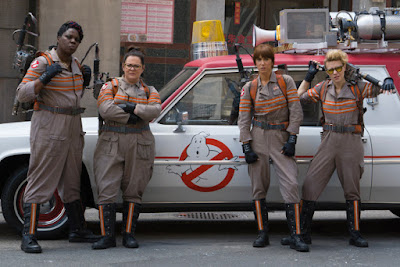 For some time now, a stream of on-line scorn has been directed at the new Ghostbusters, which attempts to reboot the 1984 original with women in the principal roles.

A confession: I don't regard the original, which starred Harold Ramis, Bill Murray, Dan Ackroyd and Ernie Hudson, as an inviolable work or even a great movie. And in a time of remakes, do-overs and sequels, a Ghostbusters reboot should do little to denigrate anyone's pop-cultural sacred cows.

So, no, the idea of the movie doesn't bother me in the least. The movie? Truth be told, it didn't bother me, either, but it also didn't make me laugh enough to enthuse over it.

As a special-effects driven comedy, the 2016 edition of Ghostbusters can't scare up enough yucks to haunt a closet, a problem that should come as a surprise to those who believe that Melissa McCarthy, Kristen Wiig, Leslie Jones and Kate McKinnon are capable of brilliant comic work.

McKinnon outdoes her comic compatriots, but this quartet gets slimed by the overblown scale of the production.

Adding Chris Hemsworth as a sexy but dumb receptionist was an interesting comic idea in gender reversal, but one that's beaten to death before the original Ghostbusters gang begins to turn up in dutifully placed cameos.

The wittiest cameo belongs to the late Harold Ramis, who appears as a bust on a mantel in the background of an early scene.

As for the rest: There's plenty of green slime and a few chuckles, but mostly the movie wastes an opportunity to bring four gifted comic actresses together for what should have been one of summer's surefire bets.

Director Paul Feig (Bridesmaids) might have been in the unenviable position of having to keep fans of the original happy and make a refreshing new comedy.

Plot? Yeah, there's a semblance of one, but who really cares? I can't imagine you'll shiver because of Neil Casey, who plays Rowan, a creep with evil plans.

The movie's idea of feminist assertion arrives in the form of an online barb one of the characters shares with her colleagues. "Ain't no bitches gonna bust no ghosts."

Ghostbusters, of course, is meant to challenge that notion as its quartet of ghost fighters aims ray-spewing devices at a series of phantoms.

But the movie is too mired in blockbuster sensibilities to say much of anything. And if it has little to say and too few laughs, what exactly is the point?

Still, I guess Ghostbusters can be considered a form of progress. Why should only men be able to make silly, bloated comedies?