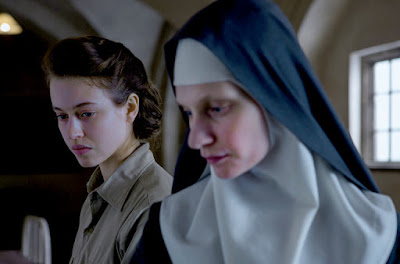 You may want to put that well-worn bromide aside after watching The Innocents, a drama about life in an austere Polish nunnery in 1945.

French director Anne Fontaine gives her movie an optimistic finale, but it goes against the grain of what has been an appropriately disturbing look at the lingering impacts of war.

Seen mostly through the eyes of a French doctor (Lou de Laage), The Innocents tells the story of nuns whose faith has been shaken by brutal war-time realities. Marauding Russian soldiers not only put Hitler's troops on the run; they raped most of the nuns, leaving many of them pregnant.

A few of these cloistered women had had worldly experiences prior to entering the convent; many were virgins whose commitment to being unsullied brides of Christ was a cornerstone of their lives.

Most of the movie involves the ways in which de Laage's character tries to help the nuns, who know little about giving birth -- or anything else for that matter. Some of the nuns are so unworldly, they don't even know that they're pregnant.

De Laage's Mathilde Beaulieu does not share the faith of the nuns, but empathizes with them as women in need of assistance. She's also having a somewhat perfunctory affair with a Jewish physician (Vincent Macaigne) who also has been stationed at the post-war Polish front. She eventually enlists his help in giving birth to the babies.

In deliberate and piercing fashion, Fontaine allows moral questions to emerge; the characters must grapple with them as best they can. There are no easy answers, and Fontaine doesn't try to manufacture any.

So back to my opening remarks. Though based on actual events, the movie offers an ending that feels too encouraging for a drama that has been so grimly focused -- or maybe the ending arrives too abruptly to feel like anything more than an add-on meant to discourage complete pessimism.

Whatever the reason, Fontaine's attempt provide a moment of redemption proves less convincing than her portrayal of the horrors that preceded it.

Those horrors serve as a necessary reminder that the terrors of war don't end when the shooting stops and that responsibility for dealing with them are burdens that many are forced to carry.