Bryan Cranston plays an undercover agent in The Infiltrator, a teeming drama about the drug war in the 1980s. 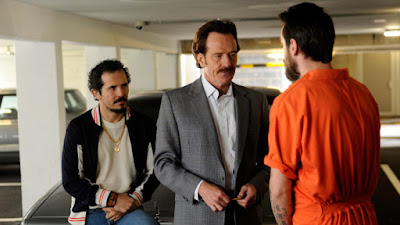 Set during the 1980s, The Infiltrator tells the story of an undercover US Customs agent who helps crack a vast money-laundering scheme connected to Pablo Escobar and the Medellin drug cartel.

The life of an undercover agent consists of dodges and duplicity. He or she must establish real connections with criminals before turning the tables on them.

That's not a new story, but with Bryan Cranston (Breaking Bad) playing undercover cop Robert Mazur, The Infiltrator has a strong center.

Mazur won the trust of major cocaine dealers by posing as Bob Musella, a businessman with money-laundering expertise and ties to the New York mob. Musella made money for big-time drug czars, but also recorded their conversations with equipment hidden inside his expensive brief case.

Watching this kind of movie affords a double pleasure. On one level, The Infiltrator relates a story about a cop who's trying to bring down bad guys. Ably directed by Brad Furman (The Lincoln Lawyer) -- the movie benefits from constant tension because, at any moment, Mazur could be exposed.

On another level, there's voyeuristic kick to be found in the milieu that Mazur penetrates. It's a world in which the top guys no longer get their hands dirty, but which also is populated by lots of scary people who do.

According to the movie, which is based on a true story, Musella convinces kingpins with obscene amounts of cocaine cash that he'll invest their loot in small companies that are entirely legitimate. He also involves one the world's biggest banks in his operations.

The movie brings up some of the same issues as Donnie Brasco; i.e., the pain that's felt when undercover cops finally complete their work. They're putting people behind bars who trusted them, some of whom they've even grown to like.

It's also challenging to go deep undercover, and still be a devoted father and husband.

While dining in a restaurant with his real wife (Juliet Aubrey), Mazur's undercover world intrudes: An underworld associate unexpectedly shows up. To preserve his cover, Mazur humiliates an unsuspecting waiter. His behavior shocks both his wife and us, and serves as a sobering reminder of the problems faced by those who live two lives.

Furman surrounds Cranston with a terrific supporting cast. John Leguizamo gives another live-wire performance as a savvy informant. Benjamin Bratt, in his best big-screen work yet, plays Roberto Alcaino, an all-business Escobar henchman with charm to burn, culinary talent and an ability to savor the pleasures of the moment. He's cocaine royalty.

The DEA even gives Mazur a fake fiancee (Diane Kruger), a woman who's on her first undercover assignment and who turns out to be surprisingly good at her work.

And when Musella and his faux fiancee socialize with Alcaino and his wife, you get a feeling for the combination of loyalty and largesse that seduces people into the drug business.

A whispering mobster in a white suit (Yul Vazquez) becomes one of the movie's scarier characters, a man of variable sexual appetites who likes to be regarded as too dangerous to be trifled with.

Amy Ryan shows up now and again as Mazur's boss, a tough woman who seems to have been deprived of the gene for empathy.

At 60, Cranston may be a trifle old for the part, but he's especially adept at showing the discomfort Mazur feels in playing a role in which missteps can be fatal.

Mazur, whose work actually took five years to complete, probably should already have given up the chase when the movie begins. He knows that he should be home with his wife and kids, but he wants to catch bad guys. Still, he's not crazy enough to be immune to fear.

In all, the movie does a fine job of showing the perils of undercover work. The closer one gets to the quarry, the more likely the chances for success and the greater the letdown when the ruse finally must be abandoned and fake alliances are betrayed. So goes the complex plight of the undercover cop: He's the hero who can feel like a heel -- and Cranston never lets us forget it.