A plot to kill a top Nazi 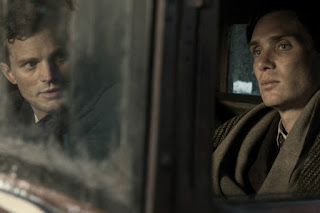 Anthropoid is not the latest horror movie to roll off the Hollywood assembly line -- at least not in any conventional way in which we use the word "horror." Rather, Anthropoid takes its title from a World War II code name for a Czech-conceived operation designed to assassinate Reinhard Heydrich, one of the worst members of a Nazi hierarchy in which competition for the title was pretty stiff. Anthropoid doesn't entirely do justice to the story of a duo of Czech fighters (Jamie Dornan and Cillian Murphy) who parachute into their country to kill Heydrich, a.k.a., the Butcher of Prague. The two Czechs, who had been living in London, are housed with a local family, and begin to associate with a variety of members of the Czech resistance. Both young men develop relationships with women, one with the daughter of the family that's hiding them, the other with one of the daughter's friends. Most of the cast is British, which means much of the dialogue is delivered with accents. Director Sean Ellis stages the assassination long before the movie ends, which means that much of Anthropoid's second half deals with attempts by the characters to escape capture by the SS. Heydrich died shortly after the assassination attempt, and the Germans unleashed brutal reprisals on the Czech population. The story culminates with a lengthy gun battle in which German soldiers try to wipe out resistance members, who, by this time, are hiding in a church. If the battle feels interminable, that's probably what Ellis intended. This intensely depicted and appropriately exhausting bit of warfare brings the movie, which has its longueurs, to its sad conclusion, but decent and often restrained work from Dornan (as Jan Kubis) and Murphy (as Josef Gabcik) can't quite lift the movie out of its earlier doldrums. Anthropoid serves as a rudimentary introduction to a neglected World War II story, but it should have accomplished more.