The moral: Be careful who you rob

Don't Breathe is effective, but not without some of the baggage of contemporary horror. 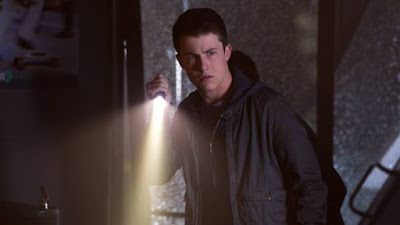 I'm generally of two minds about most contemporary horror. On one hand, it's easy to admire the extreme efficiency and imaginative daring that's required to freshen a well-worn genre with brutal, new twists.

On the other hand, I'm usually wary about the degrading violence that can crop up in such endeavors, and I often find myself wondering why I'm being asked to watch characters who are being terrorized in obviously twisted ways.

The new movie, Don't Breathe, may be more of a thriller than a display of gory horror, but it's the latest example of a movie that struck both nerves with me.

The good news: Director Fede Alvarez (Evil Dead) has made a movie that boasts imaginative twists (the perpetrators of a crime become victims) while setting off a chain reaction of taut suspense.

The premise: Three would-be burglars encounter a fierce homeowner, a blinded Iraq war veteran who has some $300,000 hidden away in his Detroit home. The money is a payout the man won when his only daughter was killed in an automobile accident.

The trio of robbers (Jane Levy, Dylan Minnette and Daniel Zovatto) have been invading homes with some degree of success because Minnette's Alex has a father who works for a security company. Alex knows when homes will be vacant and how to stymie security systems.

As the three young people confront the blind vet (Stephen Lang), they're constantly trying not to run into him. They'll turn a corner, and he's there -- armed, dangerous and serious about killing these invaders. The creak of a floorboard can prove fatal. The ability to remain frozen becomes imperative.

To add additional flavor, Alvarez sets the movie on a street where all the houses but one are abandoned. Alvarez uses the worst parts of Detroit to set a tone. It's worth remembering that what's happened to some of Detroit's neighborhoods constitutes a real horror, one that Alvarez might have used to greater thematic advantage.

The three burglars are locked in the house by the veteran, who has a vicious Rottweiler and secrets that are best discovered in a theater. Let's just say, the basement (where else?) provides a stage for some disturbing sights.

The characters are given only rudimentary motivations, but Don't Breathe shouldn't (and won't) be confused with a character study. It's a thrill machine that wants to work an audience over -- and it does. We're locked in the house with the invaders and the infuriated veteran who's trying to get rid of them.

All well and good for those who like their suspense tainted with horror, particularly if it doesn't involve supernatural mumbo jumbo.

But then there's the sick part, which includes a wince-inducing scene involving a turkey baster. No, I'm not going to say more.

Put another way: Alvarez doesn't quite transcend the genre trappings he so gleefully embraces, but if you like this sort of thing, you'll find yourself in capable hands.