Jabs, no knock-out in this boxing pic

A split-decision on the latest boxing movie, Hands of Stone. 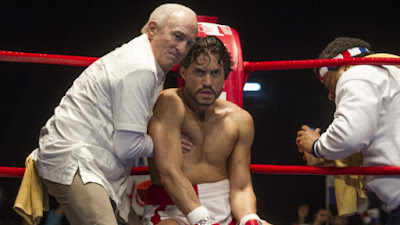 With a drastically exceeding hairline, a thinning crop of gray hair and an almost frail appearance, Robert De Niro finally gives a real performance as legendary trainer Ray Arcel in Hands of Stone, a quick-hitting biopic about Roberto Duran, the Panamanian champion whose career peaked in a ferocious bout with Sugar Ray Leonard.

Venezuelan director Jonathan Jakubowicz presents Duran's story in a series of punchy if familiar episodes. A hungry street kid acquires wealth in the boxing ring, falls into the bloat of dissolution, loses sight of what's important and only finds renewed purpose by realizing that he must once again put on the gloves.

Any director who decides to make a boxing movie inevitably must shadow box with some heavyweight movie history, recent efforts such as Creed and, for contemporary audiences, the touchstone: Martin Scorsese's Raging Bull, which featured one of De Niro's greatest performances as boxer Jake LaMotta.

Jakubowicz may have thought that he was expanding the genre simply by focusing on a non-American boxer whose personality was formed in the mean streets of Panama. He also ties Duran's story to tensions between the US and Panama as Panamanians seethe with desire for true independence.

The story's arc generates enough momentum to make Hands of Stone watchable, but I'm not sure that Jakubowicz takes us deep inside Duran's story, which features a raw, energetic performance by Edgar Ramirez (Carlos) as Duran.

Ramirez leaves us with the impression that Duran was a man of recklessly expressed aggression, rage that stemmed from anger at a father who abandoned his family. As an impoverished kid, Duran was motivated by hunger, the kind that comes from missing meals. We're not talking metaphors here.

Much of the training provided by De Niro's Arcel involves trainer and boxer in a tug of war in which Arcel tries to persuade his charge that boxing involves more brain than brawn and that the best fighters employ strategy in their efforts. You need a plan for a fight that goes beyond jumping into the ring and letting the punches fly.

Arcel's approach often chafes against Duran's bravado and impatience, traits that allow him to win the love of a school girl (Ana de Armas) he meets on the streets and whom he sweeps up in a whirlwind courtship.

De Armas evolves from schoolgirl to embittered wife during the course of the movie with Jakubowicz eventually pushing the relationship into a furious, Raging Bull-style confrontation that suggests more than it delivers. It peters out quickly.

Subplots arise, but mostly come across as skimpy. John Turturro plays a New York gangster who wants to control the fight game. Ellen Barkin does what she can with a small and somewhat thankless role as Arcel's wife. With blonde hair and a thick voice, she might be taken for the embodiment of the Bronx, circa 1955.

Ruben Blades signs on as Carlos Eleta, a wealthy Panamanian who becomes Duran's manager. He handles the money end of Duran's career; Arcel does the training. Elena shoulders most of the blame for agreeing with promoter Don King (a credible Reg. E. Cathey) to a rematch that didn't allow the hard-partying Duran enough time to get himself back into shape.

Sugar Ray Leonard (Usher) comes across as a more stylized boxer who, at first, allows Duran to get inside his head. Duran insults Sugar Ray's wife with a crude taunt. It's all part of the fight game that culminates with a Las Vegas rematch in which Duran famously quit in the middle of the bout.

If you're hoping to come away with a greater insight into what made Duran throw in the towel, you may be disappointed. He knew he wasn't prepared? He didn't care? Winning the welterweight championship in the first fight diminished his drive?

It's reassuring to see De Niro give a full-bodied performance as a trainer with a clearly defined ethos about the sport of boxing. De Niro's scenes with Ramirez have real fire, and Ramirez makes you feel the burn in Duran's hunger.

So a split decision. Hands of Stone holds our interest, but never quite delivers the punch that would have made for a great boxing movie.

Maybe it's because we're in late August, but in the world of boxing movies, this one feels like an undercard bout i rather than a main event.