A drama that takes a look at women in the world of high finance. 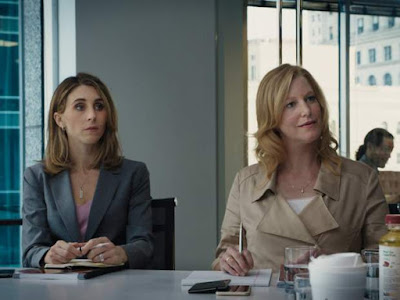 When it comes to the pursuit of money, we probably shouldn't be surprised that people have a tendency to behave badly.

The new movie Equity is full of people who act as if such bad behavior constitutes a form of obligatory service, mostly because they're focused only on serving their own interests.

But Equity isn't a typical Wall Street movie that takes aim at greed by penetrating the environs of a big-time investment bank as it watches the characters try to smash each other to bits.

Instead, it's a telling look at problems women face as they're absorbed into a business that once was a preserve for men only. The women in Equity are smart and strong, but they're subject to problems that the men in similar positions don't face, being hit on by clients who they can't afford to offend, for example.

Working with a fine cast, director Meera Menon has made a thought-provoking drama that centers on Naomi (Anna Gunn), a powerful woman who's trying to recover from a bad professional experience. An IPO that Naomi was handling went bad, something that hasn't helped her chances for advancement at her firm.

Much rides on Anna's launch of Cache, a buzz-worthy company that provides Internet security and seems destined to become one of the year's hottest new stocks.

Confident and competent, Naomi has a no-nonsense approach that fits her job, but she's up against many obstacles: an ambitious assistant (Sarah Megan Thomas) of questionable loyalty and an equally ambitious prosecutor (Alysia Reiner) who's looking into the activities of Naomi's lover (James Purefoy) -- not to mention an insufferable client (Samuel Roukin) who believes his wallet should grow to match his ego in size.

Thomas' character, by the way, is pregnant, a condition that the movie presents as a clear liability among high-stakes business people who are jockeying for advantage. Will she overcompensate by being even more treacherous than she might have been were she not soon to give birth?

Equity might have fit on today's small screens as well as in theaters, but it's willing take a women's point of view without turning its characters into avatars for obvious feminist point scoring.

And despite the affluent trappings of a high-powered business world, Equity isn't afraid to expose the ugliness beneath the gloss of success.

For Gunn's Naomi, even falling asleep next to her lover, who also works at her firm, poses a business risk. He's liable to take advantage of her slumber by trying to access the data in her cellphone.

What could be more illuminating? In Naomi's world, nothing -- including the bedroom -- is immune from competition.