Lots of action, no real traction in Suicide Squad. 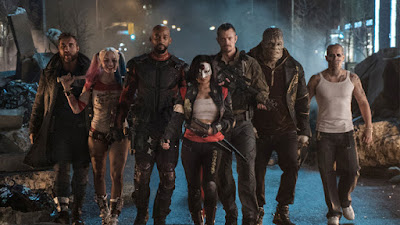 Into the endless flow of comic-book movies comes Suicide Squad, the latest entry from DC Comics to hit the nation's multiplexes. Cluttered and chaotic, the movie tells an inconsequential story about a group of super baddies who are recruited to fight evil.

There may not be 12 of them, but Suicide Squad functions as a kind of Dirty Dozen of the comic-book world, taking on a supposedly desperate moment when Superman isn't around, and Batman operates on the crime-fighting fringe; i.e., Ben Affleck has a cameo.

Heavily promoted and cast for cash, Suicide Squad does a reasonably good job of introducing its characters -- with featured work from Will Smith, Margot Robbie, and Viola Davis.

Too bad the movie eventually turns into a muddle that pits our heroic villains against a powerfully angry witch who wants to ... er .... well ... wreak havoc.

Suicide Squad advances an idea that isn't exactly novel, something about fighting fire with fire. Adopting a strictly business attitude, Davis plays the government official who decides that there's only one way to combat a villain that has invaded the subways of an American metropolis called Midway City. She assembles a task force of equally malicious combatants.

The movie's much seen trailer and its strong opening scenes ignite hope for an adventure in which Col. Rick Flag (Joel Kinnaman) will try to control the unruly misfits who must be released from imprisonment to form Task Force X; a.k.a., the Suicide Squad.

There's Headshot, a crack marksman played by Smith; the beautiful, crazy and scantily clad Harley Quinn (Robbie); and Diablo (Jay Hernandez), a tattooed character who shoots flames from his fingertips.

Diablo's uncontrollable temper has led him to commit a monstrous act. He attacked his wife and kids, a foul deed that seems too malignant even for a comic-book movie that wants to take its evil seriously.

About that evil: Let's just say that The Enchantress, the witch played by Cara Delevingne, fails to work her way into the ranks of indelible comic-book antagonists.

Other members of the Suicide Squad include Killer Croc (Adewale Akinnuoye-Agbaje), a reptilian creature who's at home in sewers; Boomerang (Jai Courtney), an Aussie assassin who takes out his opponents with (what else?) a boomerang; Slipknot (Adam Beach), a man with climbing skills; and Katana (Tatsu Yamashiro), who's skilled with a sword and pretty much an afterthought in the overall proceedings.

And while we're on the subject of afterthoughts: The movie also features an appearance by The Joker (Jared Leto). Metal teeth and maniacal laughter don't make The Joker as wild as the movie might have hoped.

The Joker's around mostly to work his evil ways on Harley. Once a psychiatrist at Arkham Asylum, Harley has been turned into a bat-wielding maniac and sex toy by the Joker.

Lots of blurry and over-extended action alternates with scenes that give members of the Suicide Squad a chance to deliver snide dialogue, but audiences that compare Suicide Squad to Deadpool (a far more successful take on good/bad guys), likely will be disappointed.

Director David Ayer (Fury, End of Watch) may have the chops for a comic book movie, but he has written a darkly hued script with little capacity to wink at its well-worn genre and a story that builds toward a second-rate display of pyrotechnics. Get the point? Suicide Squad just isn't much good.