A relationship that will make history

Michelle Robinson and Barak Obama get to know one another in this sweet but insightfully imagined version of their first date. 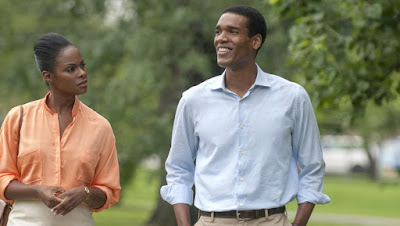 Other reviewers have played this game, but it's irresistible. Think about which presidents you might want to imagine on a first date with their future wives. George H.W. Bush and Barbara? George W. and Laura? Bill and Hillary? Well, you don't need to imagine much about that because Bill used the Democratic National Convention as a platform to talk about his first encounter with Hillary in the Yale Law School library.

Still, none of those sound intriguing in the same way that we might regard a first date between Michelle Robinson and Barak Obama. Jackie and Jack Kennedy were a fantasy. Michelle and Barak Obama seem real enough to make imagining their first date a plausible endeavor.

Writer/director Richard Tanne introduces us to a young Michelle and a young Barak in Southside With You, a sweet and telling look at two extremely bright young people who spend the better part of a day together in Chicago.

Michelle Robinson works at a high powered corporate law firm, but still lives with her parents. Her father suffers from MS, and she wants to be there for him. Obama is spending a summer between semesters at Harvard Law as an intern at the firm where Michelle plies her trade. She's been assigned the task of being his mentor. He'd like to expand the definition of the word.

Nothing really. He's asked her to accompany him to a community meeting, hoping that he can transform a collegial outing into a date. She resists because she doesn't want to mix work with her personal life.

He picks her up in his dilapidated car with a hole in the floor and the stale aroma of too many cigarettes. They attend an exhibit by black painter Ernie Barnes, have lunch in a park and find their way to the promised community meeting, which gives Obama an opportunity to show off his speaking abilities in front of an appreciative crowd. They then have a drink and see a movie, Spike Lee's Do the Right Thing.

The movie also reminds us that these two know what kinds of obstacles they'll face as high achieving black professionals.

Both Tika Sumpter (as Michelle) and Parker Sawyers (as Barak) do fine work, although I'm not sure we're ever able to see them as just a couple of kids on a date. Let's be real: It's impossible not to squeeze everything that happens in Southside With You through the filter of hindsight.

When Sawyers delivers a speech before a community group that has just suffered a setback, you can close your eyes and believe you're listening to the president as a young man flexing political muscle and developing a philosophy of realistic incrementalism. He may not get everything he wants, but he'll get as much as he can. The plan: Keep working.

Sumpter captures Michelle's wariness and her discomfort about the gossip that might spread among her colleagues if they knew she and Obama were seeing each other socially. She's forceful, but he knows how to be flexible and patient, flexible and patient enough to overcome her resistance.

Far be it from me to give advice to the president (or anyone else) about affairs of the heart, but I wonder if Obama might have made even more headway with his future wife had he broken out the Al Green imitation he used at a fundraiser at the Apollo a couple of years ago.