Pete Davidson plays a guy who can't seem to get his life started -- and likes it that way. 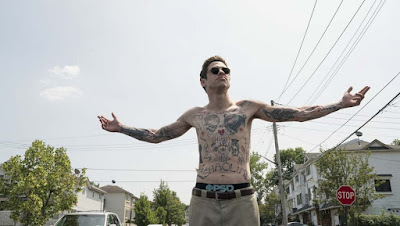 Exactly what makes Pete Davidson worth watching isn't easy to pin down. For one thing, he's an SNL guy who now finds himself at the center of a movie with The King of Staten Island, a coming of age story set in (where else?) Staten Island. But so what? Davidson joins a long parade of SNL people who have made big leaps to the big screen —- or, in this case, to the big stream. In case you've forgotten, the coronavirus has closed down the nation's theaters.

Davidson is one of those rare people who seem to be able to stand in front of a camera and be himself — or at least some version of himself: a sometimes savvy, sometimes jerky New York kid who says what he thinks, reeks with attitude and (here’s the part that matters) isn't quite as together as he sometimes pretends to be.

At his best, Davidson projects a ragged authenticity and it’s that sense of authenticity that allows The King of Staten Island to get by, even when the movie begins to lose itself in its final going.

King of Staten Island teams Davidson with director Judd Apatow, who has helped the young comic shape a variety of scenes that slide toward something resembling a coming-of-age movie. And that’s the worst part about this semi-autobiographical effort, it pushes into the kind redemptive territory that has marked other Apatow work (both as a director and producer) and sometimes looks like an apology for any raunch that has proceeded the wrapup.

As its title makes clear, Davidson's movie tries to be inseparable from its much-abused setting, Staten Island being the one place low enough that New Jersey can look down on it, as Davidson's character says.

Like many characters in coming-of-age films, Davidson's Scott is stuck. He’s directionless, living with his mom (Marisa Tomei) and watching his younger sister (Maude Apatow) prepare to depart for college and a life beyond the narrow confines of Staten Island.

Scott insists that his life is fine, except, of course, it isn't.

Scott’s father, a NY City fireman, was killed fighting a fire. (Davidson’s fireman father was killed on 9/ll). Scott never really has gotten over his father's death. Loss and the bitterness it breeds underlies everything in a screenplay that Davidson wrote with Apatow and David Sirus.

Fear of loss might be why Scott doesn’t take his girlfriend (Bel Powley) seriously. They sleep together, but he’s unwilling to define their relationship.

Scott also has a crew, young men who, like Scott, spend their time hanging out, exchanging insults, and, at one point, getting involved in a burglary at a pharmacy.

Despite what looks like an apparently underdeveloped drawing style, Scott aspires to become a tattoo artist. Having tattooed all his friends, Scott has run out of skin on which to practice. At one point, he persuades a nine-year-old kid to sit for a tattoo, an incident that brings the kid's furious father (Bill Burr) to Scott's doorstep.

As it turns out Burr's Ray is a fireman, a job that triggers Scott's anger. He thinks people who risk their lives at work shouldn't have families. After a testy confrontation with Scott’s mother, Ray decides that it’s time for him to put his divorce behind him and start dating. Scott’s mom hasn’t dated since her husband died. It's a match made in screenwriter's heaven.

Like a train that’s headed in one direction, the script then pulls into a roundhouse and changes course in a way that you can see coming and which (if you’re me) makes the heart sink a little.

I didn’t really want to join Scott's dive into the pool of self-improvement, and the movie isn’t substantial enough to fill its two hour and 17-minute length, but Davidson's take on his Staten Island experiences is well-grounded enough to push the movie into the plus category.