A journalist documents the crimes of Stalin 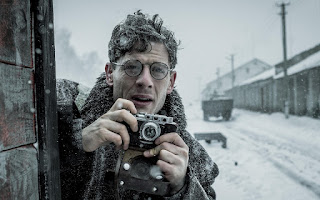 In Mr. Jones, Polish director Agnieszka Holland turns her attention to a little known story about a Welsh journalist who worked to expose Joseph Stalin’s murderous crimes in Ukraine.
James Norton portrays Jones, a dedicated reporter who early on is dismissed from his job as secretary to prime minister Lloyd George (Kenneth Cranham), a man who tried to ignore Jones’s admonitions about the growing threat of Nazism.
After losing his job with George, Jones began working independently, turning his attention to the Soviet Union. He wanted to interview Stalin, an ambition that exceeded the reality of the young journalist's connections.
Upon arriving in Moscow, Jones sought help from New York Times journalist Walter Duranty (Peter Sarsgaard), a Pulitzer-Prize-winning reporter who showed no interest in exposing the truth about Stalin’s treatment of farmers in Ukraine. As depicted here, an imperious Durante seems too immersed in his dissolute life to challenge the official line.
It's worth remembering that in the pre-war days in which the story unfolds, some western enthusiasts on the left were lauding the Soviet experiment as an estimable march toward progress.
Vanessa Kirby impresses as a writer who tries to warn Jones that he's treading on dangerous ground by insisting on traveling to Ukraine.
Mired in a variety of intrigues and storylines, the movie often feels scattershot, further muddled by scenes involving George Orwell (Joseph Mawle),  who's working on the novella, Animal Farm.
Other plot threads flutter in the winds of a movie that doesn’t become memorable until Jones reaches Ukraine. There he discovers the horrific famine that Stalin inflicted on the populace as punishment for their resistance to collectivization.
Stalin stole and sold their wheat to finance a five-year plan meant to catapult the Soviet Union into modernity.  Images of terrible suffering, brutal cold, and even famine-induced cannibalism are so hauntingly vivid they tend to put the rest of the movie to shame.