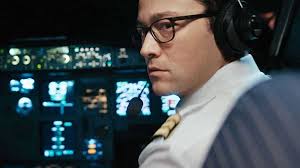 In these days of diminished air travel and airport avoidance, the movie 7500 seems a bit of an anomaly. Starring Joseph Gordon-Levitt as a pilot who must fend off Islamic terrorists during a routine flight from Berlin to Paris, the movie provides director Patrick Vollrath with an opportunity to make an efficient, if limited, thriller set almost entirely in the cockpit of a passenger jet. Credit Vollrath for nicely establishing the routine followed by pilots before blowing the story open. It's not enough. Despite a tightly controlled performance by Gordon-Levitt and Volllrath's ability to work within the confines of the plane's cockpit, this night flight of a movie lands in an unsatisfying middle ground between a no-nonsense thriller and a movie that's trying for more. Attempts are made to flesh out a minimal screenplay: Gordon-Levitt's German-Turkish girlfriend (Aylin Tezel) happens to be a stewardess working on the same flight and a frightened 18-year-old terrorist (Omid Memar) receives screen time in the movie's latter going. But to really take flight, 7500 needed more on its mind than generating high-altitude tension, most of it revolving around the question of whether Gordon-Levitt's character will accede to terrorist demands to unlock the cockpit door.