The woman Johnny Cash left behind 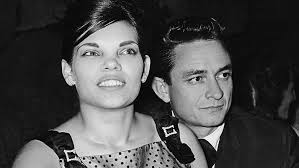 My Darling Vivian tells the heartbreaking story of Johnny Cash's first wife, Vivian Liberto. You won't see much of Cash in director Matt Riddlehoover's documentary because the movie focuses the woman left behind as Cash's career began to soar.
Riddlehoover weaves a sometimes mournful tale of celebrity, love, and neglect, making apt use of family photos, letters Cash wrote to Vivian in the early days of their relationship, and interviews with the couple's four daughters: Rosanne Cash, Kathy Cash Tittle, Cindy Cash, and Tara Cash.
The movie also serves as an antidote to the popular 2005 film Walk the Line, which starred Joaquin Phoenix and Reese Witherspoon. In that movie, Liberto (Ginnifer Goodwin) played the role of ball-and-chain to the artistically adventurous Cash. June Carter (Witherspoon), Cash's second wife, helped pull the singer from a drug-ridden swamp of self-destruction.
My Darling Vivian doesn't flatter Carter, showing her in a TV interview claiming credit for raising her  kids and Cash's four daughters, who -- in reality -- always lived with their mother.
In many ways, My Darling Vivian adds another chapter to a long series of movies that chronicle the unraveling of isolated housewives. With Cash touring and indulging the perks of celebrity, Vivian was left to hold down the fort at a home Cash built north of Los Angeles.
Cash moved the family to California to try his hand at movies but didn't get much further than a role in the audaciously titled and deservedly obscure Door-to-door Maniac.
Riddlehoover fleshes out the story with a reference to one of the stranger moments in a story that began when Cash met Vivian at a Roller Rink in San Antonio. The movie recalls a 1965 incident in which a white supremacist newspaper in Alabama speculated that Vivian might be black. (She was a dark-complected woman of Sicilian descent).
Cash became a hate group target and Vivian received death threats, not exactly a development conducive to marital bliss. Vivian, by the way, eventually remarried but her daughters think she never fell out of love with Cash.
Sustained love or not, what began as romance produced its share of collateral damage. But when you listen to some of the letters that Cash wrote to Vivian before they were married and while he was stationed in Germany during his time in the Air Force,  his ardor seems genuine and deep.
Of course, young love -- like some wines -- doesn't always mature well, which -- come to think of it -- might be the basis for a song. Too bad Cash isn't around to sing it.
On the other hand, maybe he did sing that song. Check out Cash's rendition of  Hurt, a tune written by Trent Reznor of Nine Inch Nails, or just consider this lyric from the song:
"And you could have it all
My empire of dirt
I will let  you down
I will make you hurt."
Cash died in 2003. Vivian died two years later.