A trip inside Shirley Jackson’s world

Clearly the work of talented filmmakers, Shirley nonetheless is not fully satisfying. 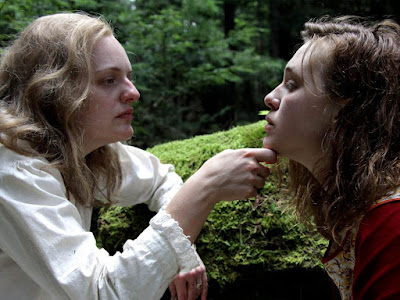 Shirley Jackson, who authored such classic horror stories as The Lottery and The Haunting of Hill House, becomes the subject of Shirley, a movie that's less a play-by-play biography than an attempt to represent the horrifyingly claustrophobic environment in which Jackson lived. It's not a pleasant place.

Directed by Josephine Decker and starring Elisabeth Moss as Jackson, Shirley takes place at Bennington, a Vermont college where Jackson battles with herself and her husband (the always terrific Michael Stuhlbarg), a professor who teaches myth and folklore with a very strong minor in philandering.

Into an atmosphere redolent with Scotch, venom, and caustically expressed intelligence, walk two apparently naive acolytes: Fred (Logan Lerman) and his wife Rose (Odessa Young). They're invited to stay with Jackson and her husband Stanley, an offer Fred sees as an opportunity to advance his fledgling academic career.

I have no idea how Moss approached the role, but she creates a woman for whom cigarettes and Scotch are as essential as the carapace of nastiness in which she encases herself. Amid the uproar and toxicity, Jackson struggles to finish the novella on which she's working, a story inspired by a young woman's mysterious disappearance.

Rest assured, if Jackson suffers, others also will be tormented.

Overflowing with faux generosity and intellectual verve, Stuhlbarg's Stanley pushes his wife to finish her book. As much a showman as an academic, Stanley proves as slyly manipulative as his talented spouse.

As the story unfolds, Sarah Gubbins' screenplay, based on a novel by Susan Scarf Merrell, evokes memories of Edward Albee's George and Martha with a dowdy-looking Moss devouring every ounce of Jackson's vitriol much like she attacks a bowl full of mashed potatoes at dinner.

Too good an actress to deliver a one-note performance, Moss also suggests the deeper terror, if only vaguely defined, with which Jackson grapples.

Decker sets the movie almost entirely in the house shared by Jackson and her husband; the cast has no trouble filling it, although the same can’t always be said of Decker.

Tamar-kali's pulsing, ominous score suggests a little more than the movie delivers and at times, Jackson seems less a writer than a mental case, perhaps pushing the movie into the kind of suspect terrain in which madness and hostility are seen as a birthright of the talented.

Significantly, the movie is set at an all-women's college during the 1950s, a time when young, educated women often were expected to finish college and then disappear into suffocating marriages, a theme that's stated a bit too obviously toward the movie's end.

So, a slightly mixed reaction from me: A collection of sharply honed performances and of shifting moods and tones, Shirley stands as a clear work of artistic ambition, but one that doesn’t seem fully to have mixed the ingredients of its odd brew: a great writer's struggles, marital minefields, academic treachery, and the mysteries of womanhood.

Shirley is just the latest of about a bazillion book-to-film adaptations lately that de-Jew the lead characters. Stanley is an old beardo, so he's still said to be Jewish, of course, but since the Nemsers are young and hot, they no longer are (even though Fred Nemser's actor is Jewish).

Aaron Taylor-Johnson is Jewish, too (though I don’t know if both of his parents are).

Actors with one Jewish-born parent and one parent who converted to Judaism: Dianna Agron, Sara Paxton (whose father converted, not her mother), Alicia Silverstone, Jamie-Lynn Sigler.

Here's part of a comment I received, this one from a reader identified as grubers:
"Shirley is just the latest of about a bazillion book-to-film adaptations lately that de-Jew the lead characters. Stanley is an old beardo, so he's still said to be Jewish, of course, but since the Nemsers are young and hot, they no longer are (even though Fred Nemser's actor is Jewish). "
I'm not publishing the entire post because it consisted of a long list of Jewish actors who presumably could have appeared in the movie.
I'm generally in favor of ethnic specificity in cases in which it's relevant, so I'm asking grubers to comment further on why Jewishness should have had a more central role in "Shirley."
If you've read Susan Scarf Merrell's novel which screenwriter Sarah Gubbins adapted and you wish to chime in on this or anything else, feel free to join the conversation.
I haven't read the novel, but after reading grubers post, I looked at a number of reviews of the novel, none of which mentioned the ethnicity of anyone aside from Jackson's husband, a reference the movie also makes as part of his characterization as a '50s-style Jewish intellectual.
So grubers, "Say more."