A war-time ordeal brought to the screen 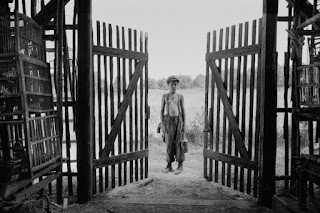 A few minutes into Czech director Vaclav Marhoul’s The Painted Bird you may think you have fallen back into the 1970s and 1980s, a time when Eastern European cinema indulged itself in stark black-and-white imagery while dipping into bowlfuls of philosophical gloom.
Actually, The Painted Bird is a belated adaptation of         Jerzy Kosinski’s 1965 novel, a book initially hailed as a harrowing semi-autobiographical account of Kosinski’s war-time experiences as a child and later thought to be more a work of the author's febrile imagination.
On film, the imagery by cinematographer Vladimir Smutny practically begs to be seen as masterpiece-level work, calling attention to its dark beauty and substantial compositional virtues. And at nearly three hours in length, The Painted Bird proves a movie with a divided soul, part horrifying war-time drama and part endurance test.
The story involves a boy (Petr Kotlar) whose father deposits him with a neighbor when the war begins, hoping to keep the boy from perishing in German death camps. It’s clear that the boy — unnamed until nearly the movie’s end — is Jewish but Marhoul treats him as a kind of generic outsider during cascading episodes of murder, rape, torment, and even bestiality. Marhoul tells his story in segments, each titled for a character the boy encounters.
You know you’re in for a rough ride when, early on, the boy is beaten by his anti-Semitic peers, and taken in by an aging woman named Marta (Nina Sunevic) whom he eventually discovers sitting dead in her chair.
As the boy forges on, he encounters one horror after another.  A miller (Udo Kier) becomes insanely violent, plucking out the eyes of a man he suspects of sleeping with his wife.
Another character (Lech Dyblik) explains the movie’s title. With the boy watching, he paints a small bird’s wings white and then releases it. Quickly, the bird is torn apart by a flock of blackbirds, an inescapable metaphor for the savagery of bigotry that has engulfed the world.
A seemingly kindly priest (Harvey Keitel) tries to help the boy but places him with a parishioner who sexually abuses the boy and torments him in other ways.
When he lands with a young woman (Julia Valentova), we initially believe that the boy finally may have found someone who will treat him kindly. No way. Among other things, the woman turns out to be so lust-ridden she has sex with goats.
The movie’s international cast also includes Stellan Skarsgard as a German soldier who helps the boy escape. Barry Pepper turns up as a Russian soldier who takes the boy underwing.
Although the story takes place during World War II, the boy’s encounters with Eastern European peasants seem reminiscent of the Middle Ages, a world of misery and thatched-roof hovels.
Marhoul infuses the movie with an abundance of brutality as he vivifies the hellish impact of war and deprivation on people whose lives already were mean and insufficient.
The Painted Bird deserves credit for diving into such deeply disturbing waters, but the line between artistry and ordeal becomes so fuzzy here that by the time the movie concluded, I no longer could distinguish between the two.