The horror in 'Relic' has some depth 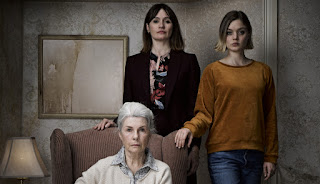 If you look at the Australian horror movie Relic as an allegory, it becomes considerably more unnerving than you might expect for a movie with haunted house tropes in its DNA.

Imagine an aging grandmother who sometimes acts exactly like the grandma to whom everyone in her family has been accustomed -- smart, independent, and feisty.
But then there are those other times, the occasions when, for no apparent reason, grandma erupts in fits of irrationally, even becoming violent.
As you might have surmised by now, grandma suffers from advancing dementia, a condition that's alienating her from her relatives and from herself.
That's the basic set-up of Relic,  but the movie isn't a medical drama.
For most of Relic's economical 89 minutes, first-time director Natalie Erika James walks the fine line between demonic horror and a more realistic terror, the horror of dealing with a demented loved one.
Fortunately for James, an able cast takes the walk with her. Emily Mortimer portrays Kay. Early on, Kay and her daughter Sam (Bella Heathcote) visit Edna (Robyn Nevin), mother to Kay and grandmother to Sam.
We're prepared for the worst because the movie's opening already has suggested that Edna is in the grips of something weird and unsettling. When Kay and Sam arrive, Edna is nowhere to be found.
True to genre form, Edna's house has fallen into disordered decay: badly stained walls, as well as a variety of creaks, groans, and eerily projected sounds.
A Post-it note Kay finds reads, "Don't follow it," leaving us to presume that the "it" to which the note refers could be an evil presence that comes and goes, haunting the house as it pleases.
Marrying familiar horror ploys to psychological tensions between mothers and daughters adds to the effectiveness of James's mysterious brew.
The movie's ending relies a bit more on horror than psychology but also will leave viewers with something about which to argue. More can’t be said without spoilers.
Overall, Relic makes its mark as a superior slice of horror that's eerie enough to give you the jitters, and then there's that sobering allegory: the idea that someone we love suddenly can turn into someone else.