'Radioactive' lacks the charge of authenticity 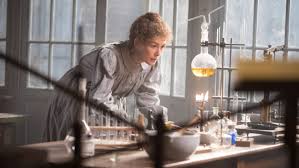 Who knew?
In the film Radioactive, Marie Curie and her husband Pierre go skinny dipping.
I don’t know whether the real Madame Curie — winner of two Nobel Prizes — enjoyed such liberated pursuits, but little about director Marjane Satrapi's movie convinced me that I was watching something real.
In addition to being mired in period trappings, the movie strains (does it ever) to show both the healthy and devastating impacts of radiation. Scenes of Hiroshima, nuclear bomb tests, and a meltdown at a nuclear plant disrupt Curie's story, as does a hospital visit during the 1950s in which radiation helps a boy with cancer.
The movie was adapted from a graphic novel by Lauren Redniss; a sweeping, time-shattering approach may have worked on the page. Here, it becomes awkward, even a trifle ludicrous at times.
As played by Rosamund Pike, Marie Curie stands as an obvious avatar for female brainpower. Sam Riley portrays Pierre Curie, Marie's husband. Also a scientist, Pierre helps Marie with her landmark discoveries of radium and polonium.
Radioactive can be groan-inducing, falling prey to creative overreach in scenes such as a dream sequence in which Marie views the future of radioactivity, a replay of an already stated theme: Radiation can be used for good or evil.
Satrapi, who directed the animated film Persepolis, begins by introducing us to the feisty Maria Sklodowska, a fiercely independent Polish emigre living in France, where she battles with the scientific establishment for lab space. Ms. Sklodowska, of course, becomes Mrs. Curie.
What the movie doesn't underline, it telegraphs. Consider poor Pierre’s fate. He handles large amounts of pitchblende in the attempt to produce radium. We know it’s only a matter of time until he coughs some telltale blood into his handkerchief.
Pierre, as history demands, doesn't succumb because of the dangerous substances with which the Curie team worked. He's run over by a horse and wagon while crossing a Parisian street.
Health-wise, it can’t be a good sign that Marie insists on taking a glowing green vial to bed with her.
The movie also spends time showing that Marie wasn’t afraid of being deemed a social outcast. After Pierre’s death, she had an affair with a married lab assistant (Aneurin Barnard), appalling even the live-and-let-live French.
But wait. There’s more.
Late in the movie, Curie accompanies her by-then-grown daughter (Anya Taylor-Joy) to the battlefields of World War I, where the two hope to save wounded soldiers by using Curie’s X-Ray machine, shown here in a cumbersome portable version. Curie's daughter Irene went on to win a Nobel Prize of her own in physics and chemistry.
If you grew up watching black-and-white TV, you probably remember that Greer Garson played Marie Curie in Madame Curie, a sanitized 1943 version of the Curie story.
No one likely will accuse Satrapi of trying to turn Marie Curie into a saint, but the movie's attempts to maintain a serious, high-stakes tone often spills into crippling melodrama or, worse, didacticism.
In trying to be more than a standard-issue biography, Radioactive winds up being much less.