Bob's Cinema Diary: July 8 -- 'The Tobacconist' and 'Guest of Honor' 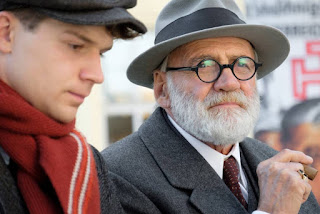 The late Bruno Ganz, the great German actor who played Adolf Hitler in the explosive Downfall, makes one of his last screen appearances in The Tobacconist, a movie in which he portrays Sigmund Freud during the psychiatrist's final days in pre-war Vienna. It’s unfortunate in a way that Freud isn’t the main character in a story that focuses on 17-year-old Franz (Simon Morze), a young man whose mother sends him to Vienna to become an apprentice to Otto (Johannes Krisch), a World War I veteran who owns a small neighborhood tobacco shop where Freud buys his newspapers and cigars. Initially interested mostly in losing his virginity, Franz is smitten by Anezka (Emma Drogunova), a woman who — when compared to the sexually inexperienced Franz — already is doing graduate work in the bedroom. Gradually, the story absorbs the gathering doom that precedes the Anschluss, Hitler’s annexation of Austria in 1938. Anti-Semitism and contempt for left-wing politics divide the city’s population as the independent-minded Otto heads for an inevitable run-in with the Gestapo. Otto doesn't discriminate; he sells to Jews and Communists. Director Nikolaus Leytner’s re-creation of pre-war Vienna sometimes feels as artificial as a stage set. Moreover,  the increasingly disturbing political climate that invades Franz’s dreams, which we see, becomes repetitive.  You also have to buy the notion that a young man from the German countryside would regard Freud as something of a mentor and that Freud would respond. But Ganz gives Freud the weary charm of a man who has lost the certitude of his earlier years as his whole world unravels. The Tobacconist sometimes stays a little too close to the surface, but the movie has just  enough weight to make it worth a look. 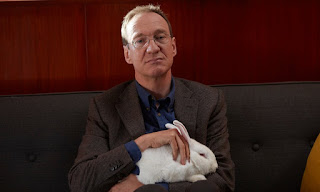 Atom Egoyan (The Sweet Hereafter, Ararat) has a knack for going his own way and the trend continues with the director’s latest, Guest of Honor. David Thewlis portrays Jim, a restaurant health inspector whose music-teacher daughter Veronica (Layla De Oliveira) willingly serves time in prison for a sexual offense with one of her teenage students.  The catch: She’s doing the time, but didn’t commit the crime. In a screenplay full of guilt and accusation, Guest of Honor touches on a long-ago affair that Thewlis’s character had with his daughter’s music teacher during the time when his wife was terminally ill. Thewlis never has had difficulty conveying the complexities of the characters he plays. But a muddled story and a framing device in which Veronica meets with the priest (Luke Wilson) who’s about to preside over her father’s funeral keep Guest of Honor from catching hold. Moving among various storylines and employing flashbacks, Egoyan never finds enough dramatic momentum and Veronica's encounter with a school bus driver (Rossif Sutherland) who’s obsessed with her takes an unlikely turn. Considering the rich emotional terrain at Egoyan's disposal, it's odd that the most interesting parts of the movie involve Jim’s restaurant inspections, which include a strange encounter with a couple that's preparing a meal in which rabbit will be the main course, preceded by a dish that may not whet your appetite: fried rabbit ears. Did I mention that Jim also takes care of his daughter's pet rabbit? Little about Guest of Honor made we want to subject any of this to further contemplation. If you do wish to give it additional thought  ... well ... that's what comment sections are for.
Posted by Robert Denerstein at 4:10 PM