He goes on-line to destroy others 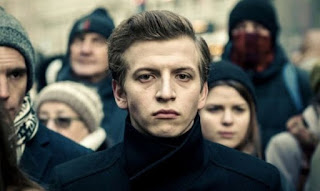 Director Jan Komasa’s Corpus Christi made its mark as one of the best movies of 2019, landing an Oscar nomination in the best-international-feature category. Komasa follows his story about a former convict who poses as a priest with a thriller about a young man who manipulates information to sway elections.
Tomasz (Maciej Musialowski) flunks out of law school after being accused of plagiarism. When meeting with a review board before his expulsion, Tomasz faces the charge with a mixture of posturing and pleading.
Plagiarism? What’s the big deal? He knows the material.
Significantly, Tomasz argues for fluidity in determining what constitutes plagiarism to a panel of older professors who believe words have meaning. Plagiarism is plagiarism, as one of the professors puts it.
As we’ll learn, Tomasz understands the malleability of perception all too well, particularly in an online world where fraudulent claims are easily manufactured. And you wonder whether Komasa wants us to see Tomasz as emblematic of a generation that respects nothing but its own ambition and, as such, has no moral center.
With a law career off the table, Tomasz goes to work for a woman (Agatha Kulesza) who runs a firm specializing in discrediting political candidates. Kulesza turns her character into a specialist in breezy amorality, a talent that Tomasz already seems to have mastered.
I’ve read that Kulesza’s character appeared in a Komasa previous movie — Suicide Room — and that those who’ve seen that movie (I haven’t) will pick up details that relate to the link The Hater to the previous movie.
Taken on its own, The Hater turns out to be a somewhat tangled affair that piles an awful lot on its plate, a farrago of contemporary concerns that sometimes feel as if they’ve been crammed into the story lest anything is overlooked.
Begin with class antagonism. As it turns out, Tomasz’s law-school stint was being sponsored by a wealthy liberal family that knew him as a child.
Tomasz, who hails from rural Poland, has his eye on Gabi (Vanessa Aleksander), one of the wealthy family’s daughters. The family’s politics lean left and, at least initially, they treat Tomasz with the kind of mocking condescension only elites can manage.
The movie sets out to show that Tomasz is more formidable than others suspect. Tomasz’s key deception involves Pawel (Maciej Stuhr), a liberal candidate for mayor who keeps his gayness secret.
Tomasz even goes so far as to be seductive with Pawel, taking him to a gay club where the trusting candidate can be photographed on the dance floor. Outing himself as a gay might be tantamount to political suicide in contemporary Poland, which -- of course -- Tomasz knows.
The Hater tries to unite its many themes toward the end when  —  motivated by Sun Tzu quotes — Tomasz becomes a kind of “lost agent,” a spy who ingratiates himself with his opponent before moving to destroy.
He carries his “oppo” tactics to an extreme, hacking into a video game so that he can push a potential assailant toward an unspeakable act of violence. Unafraid of either irony or overstatement, Komasa uses Beethoven's Ninth Symphony as a counterpoint to the bloodshed that finally erupts.
And to add one more ironic fillip to the story, Tomasz engages in the ultimate outrage, turning himself into a hero in the evil drama he has created.
Of course, it’s all too much. But I suppose that’s what Komasa had in mind — mass murder as the catastrophic consequence of the many themes he has put in play.
By the movie's end, we, of course, are asking ourselves whether Tomasz has learned anything? The smart money won't be betting heavily on remorse and rebirth.