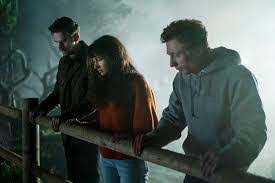 Two brothers and the women in their lives decide it would be great to spend a weekend in a beautiful home perched on the edge of an oceanside cliff in the Pacific Northwest.
This foursome spends a delightful weekend escaping from daily worries, enjoying one another’s company, and having the kind of stimulating conversations that would turn anyone into an eager eavesdropper.
By now, you probably know that I’m not talking about a movie because in movies when people head to an isolated coastal house — no matter how scenic the setting — trouble awaits.
So you won’t be surprised by The Rental when the couples under consideration encounter the home's weird, slightly hostile caretaker (Toby Huss). You’ll also be prepped for danger by the alternately creepy and ominous score.
In his first directorial effort, Dave Franco tries to upset the genre apple cart but only partially succeeds.
Franco plays on friction between the brothers based on personal history, an ill-advised sexual encounter, and a hidden video camera that records it — although it’s not clear what purpose such video might serve. Blackmail? Turning these weekenders against one another? Providing kinky kicks for the person who put the camera there in the first place?
Dan Stevens plays Charlie, a successful guy who’s married to Michelle (Alison Brie). Charlie’s brother Josh (Jeremy Allen White) expresses massive insecurity about his relationship with Charlie’s business partner (Shiela Vand).
Josh plays the group’s outlier, a college dropout who served time in jail for beating up a guy outside his frat house. Josh seems more addled than violent, but appearances can be deceiving.
Vand’s Mina, a woman of Middle Eastern descent, raises objections to the property manger’s apparent racism. The others seem to want to focus on fun, having planned to hike, down some Ecstasy and party.
As the story advances, secrets must be protected amid what we take to be a growing threat that eventually dips into mayhem at the hands of a figure who seems to have wandered into the proceedings from a Wes Craven movie.
Your tolerance for The Rental depends a lot on how intriguing you find the movie’s four main characters, who might be refugees from any number of indie films. Mumblecore veteran Joe Swanberg (Drinking Buddies) co-scripted the movie with Franco.
The screenplay flirts with issues about the tendency of the privileged to evade consequences, but these turn out be glancing blows.
Personally, I didn’t find this millennial foursome all that captivating and I certainly could have done without the movie’s horror elements, which arrive … well … because all that ominous music says they must.