An 'Anna Karenina' rich with artifice

A radian Keira Knightley shines as Anna, but it takes time for the story to break through all its artifice. 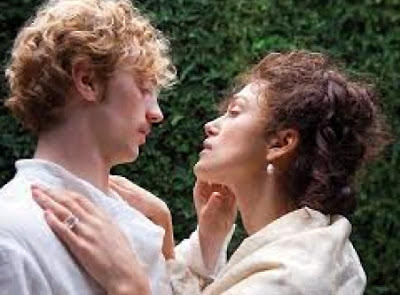 Director Joe Wright and playwright Tom Stoppard have tried (boy, have they tried) to avoid the musty odor of costume drama in adapting Tolstoy's masterpiece, Anna Karenina, a novel that has been brought to the screen at least a dozen times.

Wright (Pride and Prejudice, Atonement and Hanna) immerses the movie in theatrical artifice and dazzling stagecraft. He uses model trains as real trains. He sets scenes in front of a proscenium arch. He has characters walking on catwalks suspended over the sets. His opening scenes quickly destroy the naturalistic grounding we're accustomed to finding in period pieces.

Rather than adding a sense of contemporary urgency, Wright's artfully exercised gimmickry gives Tolstoy the feeling of an opera -- albeit one in which the characters never sing. Exposing us to the artifice of the settings can be both distracting and instructive, and one presumes that Wright wants to put the empty facade of a highly defined society on display. He plays urban falseness against the more authentic realities of country life, breaking away from the confines of sets and filming rural scenes on actual landscapes.

Amid all this, the story clarifies itself in concise bursts. I sometimes felt as if I were watching greatest hits from Anna Karenina, snatched from the pages of Tolstoy and presented in a giddy whirl.

Wright and Stoppard concentrate on Tolstoy's story of passion and ruin, one of the great themes of the novel. Anna (Keira Knightley) is married to Karenin (Jude Law), a government minister. She has a young son and most likely believes herself to be happy and well-placed in society. Then, she meets the alarmingly attractive Count Vronsky (Aaron Taylor-Johnson). Anna's world is rocked by the intrusion of undeniable passion, a desire that will lead her away from the constraints required to keep up appearances in a world of scintillating Tsarist-Russian surfaces.

Vronsky represents another facet of appearances; he's striking in his white uniform, a figure who -- as the late Pauline Kael once said of someone -- looks as if he belongs on top of a wedding cake.

Anna's story is set against the backdrop of another tale. Levin (Domhnall Gleeson) is a young man who initially is rejected by a princess (Alicia Vikander). He then retreats to his rural estate where he tries to relieve his painful self-consciousness by joining with the peasants in physical labor.

Consider this a gloss on Tolstoy's story. There are many additional characters and currents that ripple through a movie that sometimes seems as if it's caught in a limbo between the stage and the screen with hints (as already noted) of opera and even of ballet tossed in for good measure.

A stylized ball where Anna and Vronsky dance calls much attention to itself, as does a lot of what Wright attempts. Wright's betting that no amount of artifice can squelch the story's emotional life.

To the extent that this holds true, credit must be given to the performances, most of which survive the movie's devotion to so much uber-artistry. Knightley can be radiant, determined, vulnerable and shattered as Anna. Law, who has been made to look clerical and plain, makes a sturdy Karenin, a man trying to control a situation that's spiraling toward chaos. Attuned to the importance of social arrangements, Karenin seems incapable of connecting marriage with passion. Taylor-Johnson makes a dashing if increasingly distressed Vronsky.

The main actors are bolstered by a large and well-selected supporting cast that includes Kelly MacDonald as Dolly, Anna's sympathetic sister-in-law, a woman trying to get over the adultery of her husband (Matthew Macfadyen.)

Once the affair between Anna and Vronsky is exposed, Wright no longer can maintain the movie's spinning frenzy. The pace slows. Prices must be paid.

Credit Wright with pushing the medium and trying a fresh approach to Tolstoy. I can't say it entirely works, but in the end -- many of the emotions associated with Anna's tragedy remain, and I doubt whether any actress could bring more to the role than Knightley, who embodies nearly all of Anna's epic passion and gathering torment.