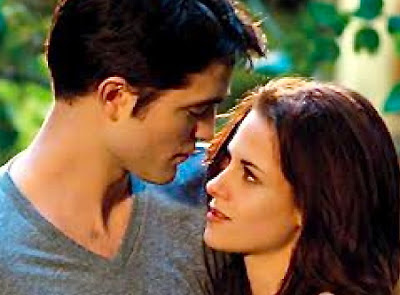 Before the screening of the final chapter of the Twilight series -- The Twilight Saga: Breaking Dawn - Part II -- I chatted with a devotee of the Stephenie Meyer novels, who encouraged me to read the books, which she preferred to the movies for a variety of reasons that I'm in no position to judge. I haven't read any of Meyers's books, and, despite encouragement from a perfectly nice fan, I plan to keep it that way.

On screen, the series wraps with a multitude of soggy scenes that build toward a climactic final battle as Hollywood bids farewell to Bella and Edward, who, by this time, have been joined in matrimony.

The movie begins with Bella awakening after her conversion from human to vampire. It seems that Bella and Edward also have become parents of a daughter, Renesmee. It's just here that the movie sinks its teeth into the semblance of a plot: The Volturi -- nose-in-the-air vampires who reside in Italy -- want to snuff out poor Renesmee because they think kiddie vampires are so uncontrollably destructive, they're likely to give more decorous vampires a bad name.

But Renesmee is only half vampire. She's not immortal. And it's up to the Cullen clan of vamps either to persuade the Volturi that Renesmee poses no threat or to battle them to the death, with a little help from werewolf friends. Or something like that.

I find it nearly impossible to pay close attention to the story points in these movies because I'm too busy waiting for what have become a series of obligatory audience responses -- oohs, ahs and screaming, not at the horror of a vampiric threat, but at the sight of Taylor Lautner revealing his carefully sculpted abs.

This time, Lautner's Jacob -- a werewolf -- spends a lot of time hanging around the Cullen clan because he has "imprinted" himself on young Renesmee, who grows to maturity at an alarmingly fast rate. It takes Bella time to accept the fact that Jacob will retain a lifetime connection to her daughter.

The movie has a full plate: It must somehow settle things between Bella and her father; it must set Renesmee on some sort of life course, and it must let us know that Bella and Edward will remain undead in some perpetual happily-ever-after.

Director Bill Condon has some fun showing how Bella discovers her vampiric powers. Her senses are heightened. She develops extraordinary strength. Like other vampires, she also can move at hyper-speeds. My favorite lesson: Bella has to learn how to make believe that she's breathing so that she can pass as a human when necessary.

By now, the cast has become comfortably familiar. Robert Pattinson's Edward gets gets to watch as Kristen Stewart's Bella evolves as a vampire, but he's still capable of falling into moments of swooning adoration. Stewart grows Bella's confidence as she masters a new skill set.

As head of the Volturi, Michael Sheen gives the movie's most archly entertaining performance.

The Twilight series has proven itself critic proof. Its fans don't care what critics think -- and they've turned out in large enough numbers to create a phenomenon that has sustained high box-office levels since 2008.

The most enduring lesson I learned came in the final chapter when it became apparent that vampires can be killed by ripping their heads off and throwing them into a fire. No stakes through the heart for these folks.

As for love between Bella and Edward -- which oozes adolescent ache like an overripe piece of fruit that's being squeezed too hard -- I bid it a fond, if relieved, farewell. Unlike the movie's legions of fans, I have no desire to see it go on forever.