Calling attention to the Master of Suspense without adding a great deal of insight. 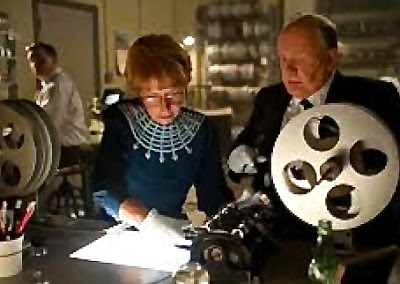 Earlier this year, Alfred Hitchcock's Vertigo ended the 50-year reign of Citizen Kane as the greatest movie ever made -- at least according to a much-watched poll conducted by the British magazine Sight & Sound. Then came the eagerly awaited but generally disappointing HBO movie, The Girl, an examination of Hitchcock's weirdly obsessive relationship with actress Tippi Hedren, who starred in both The Birds and Marnie.

As if to keep this mini-revival percolating, we now have Hitchcock, a film with a title that suggests an extensive biography but which focuses only on the ordeal Hitchcock faced in making Psycho, a landmark horror film that caused a generation of moviegoers to think twice when pulling back a shower curtain.

For all of this renewed interested in Hitchcock, the cumulative impact of the Sight & Sound poll and two movies about the renowned Master of Suspense have added little by way of fresh insight into one of the screen's most peculiar geniuses, as well as one of its most formidable talents.

Hedren's story already had been recounted in Donald Spoto's 1981 biography, The Dark Side of Genius: The Life of Alfred Hitchcock. And aficionados long have been familiar with much of the lore surrounding the making of Psycho, the 1960 classic that Hitchcock shot in black-and-white and infused with some of the impolite energies of low-rent horror.

For those who are unfamiliar with Hitchcock's life, Hitchcock -- directed by Sacha Gervasi (Anvil! The Story of Anvil) and starring Anthony Hopkins as Hitchcock -- offers the amusement of backstage meandering through Psycho's evolution. Precisely who wishes to watch such a movie remains a little unclear to me. We'll see.

Some background: After North by Northwest, Hitchcock turned his attention to a 1959 novel by Robert Bloch. Bloch's Psycho was inspired by the case of real-flie serial killer Ed Gein. Arrested in 1957, Gein specialized in murder and the exhumation of body parts.

Psycho's road to the screen was bumpy, requiring Hitchcock to mortgage his home to finance a movie that Paramount and its long-time chief -- Barney Balaban (Richard Portnow) -- regarded as an astonishingly bad idea.

The screenplay for Hitchcock -- credited to John J. McLaughlin and Stephen Rebello -- portrays Hitchcock in a period when he found himself at odds with his wife Alma (Helen Mirren). Alma is portrayed as the woman behind the man, truly Hitchcock's better half. According to the movie, Alma should be regarded as essential to Hitchcock's overall success.

In this telling of the tale, a gallant and well-mannered screenwriter, Whitfield Cook (Danny Huston), who had worked with Hitchcock on Strangers on a Train, arouses Hitchcock's jealousy by establishing a flirtatious relationship with the attention-starved Alma, who evidently had become accustomed to tolerating Hitchcock's fascination with chilly, beautiful blondes.

So what of Hopkins's performance? Keep in mind that Hitchcock was not only a great director but a prominent figure in American culture, mostly because of his television show, Alfred Hitchcock Presents. Long before I had heard of the auteur theory, I knew about Hitchcock, understood something about his style and eagerly lined up to see anything he had chosen to direct.

Put another way, I've seen Hitchcock, and even in a fat suit, Hopkins is no Hitchcock. Still, the obviously gifted Hopkins does his best to find Hitchcock's humor and flair for showmanship, as well as his moments of insecurity. Mirren does better as the steadfast Alma, a woman whose plainness of appearance was matched by a widely acknowledged sharpness of mind.

Moreover, Judy Becker's production design -- particularly of the Hitchcock home -- captures the bright rigidity of the '50s, down to the twin beds in which Alma and Alfred slept.

If you're a Hitchcock fan, all of this may strike you as intriguing and you may want to devote some time to discovering where the screenplay has taken liberties with fact. Invention aside, this sometimes amusing look at Hitchcock doesn't dig deeply enough into either Hitchcock's psychology or his artistry to qualify as anything more than a by-the-numbers curio about the making of a movie that has stood the test of time as one of the greatest of all horror movies.

Better than a fictional film about Hitchcock and his films is watching the surviving reels of a movie Hitchcock all but directed, for free, online. Here's the link. I was one of the hundred or so bloggers who has participated with "For the Love of Film", and I believe I am the only one from the Denver area. More on how we made this happen here.