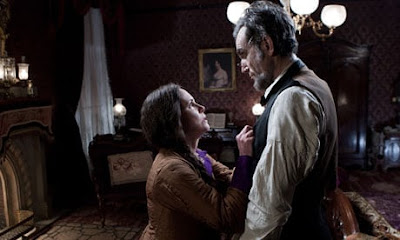 Steven Spielberg's Lincoln opened on both coasts last week, receiving mostly glowing reviews for its seriousness of purpose and for Daniel Day-Lewis's performance as a stooped but canny Lincoln, a president who knew how to use his homespun, country lawyer charm to great advantage. And, yes, just about everyone has applauded Spielberg's restraint, praising him for refusing to bury the story under swells of obvious sentiment or corn-fed patriotic goo.

All that's true. Tony Kushner, who wrote Angels in America and also co-authored the screenplay for Spielberg's Munich, has taken his cue from Doris Kearns Goodwin's Team of Rivals: The Political Genius of Abraham Lincoln , paying careful attention to the political in-fighting caused by Lincoln's insistence that the House of Representatives pass the 13th Amendment, the landmark piece of legislation that outlawed slavery.

Taking place two years after Lincoln signed the Emancipation Proclamation, Spielberg's historical opus avoids towering, bio-pic sweep, focusing instead on the ways in which Lincoln plied his Democratic opponents (with jobs and other rewards) to encourage them to vote for the amendment. At the time, Republicans advanced progressive views on slavery and the Democrats insisted on preserving the status quo.

Lincoln also was operating under a deadline of sorts. By January of 1865, it had become apparent that the South would lose the war. Lincoln, who stalled a peace delegation of southerners, wanted slavery abolished before any truce could bring the secessionist southern states back into the union fold.

Day-Lewis's Lincoln seems happier if he can tickle the opposition into submission rather than clobber it into compliance. Lincoln likes to tell pointed stories that he finds terribly amusing and which encourage a good deal of eye-rolling among an entourage that sometimes finds itself eager to take less circuitous routes to the point.

The Lincoln we meet in Spielberg's movie is also a savvy wheeler-dealer who understands that persuasion sometimes requires pliable ethical standards. Spielberg & co. wouldn't have been wrong to see a bit of trenchant topicality in the story of a beleaguered president trying to work with a divided, recalcitrant Congress.

Daw-Lewis puts himself on the fast track for an Academy Award nomination by playing an iconic figure and trying to make him life-sized. He gives such a meticulous, carefully considered performance that I found myself wondering if he wasn't being a little too cautious.

Although Lincoln tells amusing stories, the real humor in the movie stems from Tommy Lee Jones, who pays the staunch abolitionist Thaddeus Stevens. Jones's caustic Stevens is an out-sized creation that enlivens the movie's sometimes subdued tone, reinforced by cinematographer Janusz Kaminski's fondness for dimly lit interiors, appropriate one supposes for the period.

As Mrs. Lincoln, Sally Field can be vivid, and, I think, right for the role. Bereft over the loss of a young son, she's terrified when her oldest son Robert (Joseph Gordon-Levitt) decides to join the Army. A scene in which Lincoln and Field's Mary Todd Lincoln fight over their children is one of the most fully realized in the movie. Unable to dissuade Robert from joining the army, Lincoln secures him a relatively safe staff position.

At times, I found myself thinking that if C-Span had existed in the 19th century, it might have looked a bit like Lincoln, particularly in scenes that take place on the House floor. And although Lincoln is no museum piece, not every scene springs fully to life, perhaps because the movie sometimes feels constricted by what may have felt like an obligation: Get the historical details right.

As befits a movie with a cast that seems the size of the entire Congress, Lincoln boasts a variety of notable appearances. Jared Harris portrays Ulysses S. Grant. David Strathairn is all starch and polish as Secretary of State William Seward, and an unrecognizable James Spader portrays W.N. Bilbo, a political operative who's not put off if asked to operate on the shady side of any ledger. You'll also find work from John Hawkes, Jackie Earle Haley, Hal Holbrook, and Tim Blake Nelson.

The movie opens with a ferocious battle scene, which probably was necessary. The cost of war weighs heavily on Lincoln and on the movie. We feel the sadness of unprecedented slaughter. I don't suppose I need to tell you how the story ends, although it's worth pointing out that Spielberg's ending (more epilogue than finale) leans toward hagiography; it's too much of a genuflection for a movie that has tried to avoid myth-making.

I certainly wouldn't want to dissuade anyone from seeing Lincoln, but I also would tell you that I watched this movie from the outside, always aware that I was seeing a re-enactment of history rather than experiencing a historical drama. Thorough, brilliantly competent and at times stirring, Lincoln has many obvious virtues, but it never quite attains the greatness its subject seems to demand.