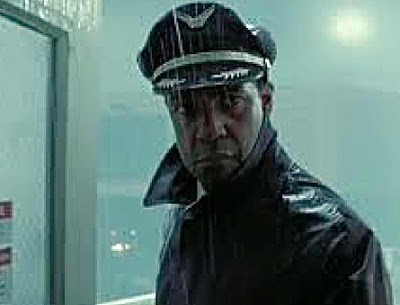 Flight -- the latest film from director Robert Zemeckis -- has all the markings of another Hollywood thrill ride. With Denzel Washington playing a commercial airline pilot, the movie seems headed for the kind of territory in which the steely expertise of a seasoned pilot saves an imperiled plane. You half expect an airborne version of Unstoppable, a terrific action movie in which Washington played an engineer trying to head-off a runaway train.

Although Flight features some of the most harrowing airborne sequences ever, it's as much about an imperiled life as an imperiled plane. From the opening scenes in a disheveled hotel room, it's clear that Washington's Whip Whitaker has a drinking problem that he tries to temper with head-clearing snorts of cocaine.

The story revolves around Whip's two lives: His life as a dissolute drunk and his life as a guy who believes he can leap from an alcohol-infused stupor to his highly demanding job without losing a step. It's the kind of confidence that comes from having done it before -- probably a lot.

But a flight from Orlando to Atlanta changes everything, and introduces some welcome moral complexity into Zemeckis's movie.

Whip is flying drunk when his plane experiences a grave mechanical failure. He's able to call on training and reflexes to deal with the situation, but there's no gainsaying his intoxication. He's a completely irresponsible hero who saves 96 of the plane's 102 passengers -- and does it without a miscue.

In a moment of extreme crisis, the captain in Whip takes command of the drunk, even to the point where Whip flies the plane upside down in order to slow its fall.

After its compelling opening and horrific crash-landing, the movie establishes itself as something else, the story of an addict whose ability to deceive himself and others is threatened by a National Transportation Safety Board investigation into the crash.

Washington -- who's now almost 58 and beefier than when he was younger -- gives a memorable performance as a man who has gone through a bitter divorce and seldom sees his teen-aged son. Whip has nothing going for him other than twined abilities: He can fly and he can lie.

The movie's early scenes introduce another character, a young heroin-addicted woman (Kelly Reilly) who, after an overdose, will meet Whip in the Atlanta hospital where he -- and the surviving passengers and crew -- are taken after the crash. For a time, Whip's life mingles with Nicole's at the family farm where Whip retreats to hide from the press.

I don't know if it was absolutely necessary, but a scene in which Whip, a cigarette smoker, meets Reilly's Nicole in the hospital is a real crowd-pleaser. Not because of anything Reilly or Washington do, but because of a monologue delivered by a cigarette-smoking cancer patient (James Badge Dale).

Clearly, this is Washington's show, although the supporting cast is quite good. John Goodman adds robust comic relief as a take-charge drug dealer, one of Whip's wayward pals. Don Cheadle plays the smart, amoral lawyer who's asked to guide Whip through his NTSB ordeal, and Bruce Greenwood portrays a long-time friend and union representative who's eager to turn attention away from pilot fallibility and onto failing equipment.

Washington's scenes with Cheadle are particularly interesting. As savvy as Cheadle's ("I can fix anything") character is and as wobbly as Washington's Whip becomes, Washington takes charge of every moment, never entirely letting go of Whip's defiance, bravado and percolating contempt.

Melissa Leo has a small but effective turn as an NTSB lawyer who wants to expose Whip for what he is.

Now, the movie is not without problems. It seems unlikely to me that a man such as Whip could hide his addiction from his employers. The movie suggests that others have served as Whip's enablers, but still. Moreover, the way in which the screenplay dispenses with the co-pilot's knowledge of Whip's condition struck me as far-fetched.

Zemeckis makes up for some of these problems with a agonizingly tense scene in which Whip -- in an attempt to straighten himself out -- tries to resist the siren call of a miniature bottle of vodka in a hotel mini-bar.

Back to live action after forays into animation with Polar Express and A Christmas Carol , Zemeckis doesn't flinch when it comes to showing alcoholic behavior. And I wondered whether the director of Forrest Gump and Back to the Future wasn't trying a little too hard to establish his hard-boiled bona fides.

Not to worry: After all the hard drama, Zemeckis brings the movie in for a soft landing with scenes that take some of the sting out of its previous tough-mindedness and which struck me as false.

Whatever its shortcomings, Flight benefits greatly from Washington's strength: Even when the movie falters, Washington's never anything less than riveting as a pilot whose life has spiraled out of control -- even while he's thinking that he's far too slick to land with a crash.