He takes a limo from job-to-job 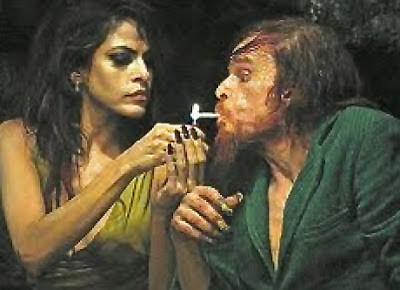 Holy Motors, the latest film from French director Leos Carax, struck me as the kind of movie that sometimes opens a gap between audiences and critics. Critics tend to enthuse over the kind of purposeful weirdness and blatant opacity in which Carax specializes, and audiences wonder why those same critics can't get a bit more enthusiastic about the latest installment of the Twilight series.

I exaggerate, of course. Maybe.

If you see Carax's movie, see it for the ways in which the director toys with the medium, with the audience and perhaps with himself.

To get something out of Holy Motors, you pretty much need to accept it without pressing for too much meaning. Much of the movie revolves around a spacious white limo, so I guess I'm suggestion that you go along for the ride.

One one level, the movie is about acting and movies, so self-consciously so that it opens with Carax waking up in a darkened room, approaching a wall covered with a forest design, pushing opening a door in the wall and finding himself in a movie theater.

At that point, Holy Motors becomes a series of vignettes about a man (Denis Lavant) who travels around Paris in a limo, putting on all kinds of make-up and carrying out "assignments" which (at least on the surface) have no apparent connection to one another. The man -- known as Mr. Oscar -- works for something called "The Agency."

In one of the movie's most memorable sequences, Mr. Oscar transforms himself into a scruffy monster of a man who rumbles his way through the famous Pere Lachaise Cemetery in Paris, a place where devotees visit the graves of luminaries as varied as Marcel Proust and Jim Morrison.

But Mr. Oscar has not come to pay homage to the towering cultural icons that lie in Pere Lachaise's prestigious repose. Instead, he invades a fashion shoot and kidnaps a model (Eva Mendes). He dresses her as a Muslim woman, and eventually drags her into his sewer lair.

This foul creature, who apparently turned up in previous Carax movie, seems to represent an unleashed form of id -- or perhaps something else. In any case, I laughed (and cringed) when when he bit off a woman's fingers, a bizarre but mordant expression of uncivilized bravado.

At another point in the movie, the great Michel Piccoli -- as a man who seems to represent the organization that gives Mr. Oscar his assignments -- shows up for a talk.

Shifting scenarios and multiple identities put a severe demand on Lavant, who more than rises to the challenge of playing characters who spring from a limo, but seldom feel rooted in reality.

And if Lavant's Mr. Oscar conveys a certain sense of weariness with his ever-changing assignments, maybe it's because they're fraught with impermanence. Perhaps he's wondering what he's accomplishing as he's driven from place to place by a chauffeur (Edith Scob) who dutifully presents him with each new assignment.

I leave it to you to extract whatever meanings you can from Carax's Holy Motors, his first feature since 1999's Pola X. If you decide only to enjoy the movie in bits and pieces, at least you'll know that some of these bits and pieces can be as extraordinary as they are confounding.

Posted by Robert Denerstein at 1:09 PM

I haven't see this but know that the 'scruffy monster' that Mr. Oscar turns into is the same as from Leos Carax's short film in the movie, 'Tokyo', in which his name is "Merde"! Very strange and interesting short (and I absolutely love the 'Shaking Tokyo' short). Here's the IMDB link: http://www.imdb.com/title/tt0976060/