For James Bond, life gets harder

Does Bond still have it? An exciting Skyfall puts the question to a staunch test. As an iconic movie hero, James Bond has died many deaths, only to be reborn in new guises for new times. Once known for his impeccable style and unquestionable taste in martinis and women, Bond recently has settled into a recessionary mode -- at least as far as his erstwhile playboy image is concerned.

In Skyfall -- his third Bond movie -- Daniel Craig has become an even blunter, more stoic Bond. In a time when drones target terrorists, when small units of highly trained Navy SEALs can seem more effective than entire armies and when shadowy villains seem more interested in lethal disruption than in global conquest, the single-handed bravado of Bond might seem as out-dated as the preposterously ambitious villains of 007's big-screen formative years.

Skyfall continues Bond's march into the future -- and more. It entertains, chastens and finds its own distinctive voice. 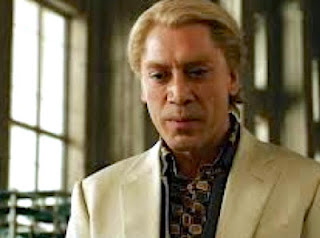 In keeping with this new spirit, Skyfall features an amusingly sly villain, a former MI6 agent played with wily, seductive ease by Javier Bardem, who adds to the gallery of classic villains he began creating with Anton Chigurh in No Country For Old Men.

Despite his casually expressed cruelty and the threat he poses to British intelligence, Bardem's Silva isn't the only enemy Bond must face. Bond also must do battle with time. He's forced toward introspection as he wonders whether he's truly up to the task of combating the evil Silva and preserving the integrity of MI6. The devious Silva threatens to expose a raft of agents on the Internet. He must be stopped from executing a cyberterrorist assault on secrecy.

But even here, the Bond series faces adaptive pressures. Is Silva out to conquer the world as a result of a maniacal lust for power? Not really. He's more disgruntled employee than global threat. And as we eventually learn, he has good reason to be upset.

To fulfill its mission of creating a more human Bond, the series has brought on a director whose reputation hardly hinges on action. Sam Mendes (best known for American Beauty, Road to Perdition and Revolutionary Road) doesn't skimp on action set pieces, but he brings a welcome sense of dramatic grounding and psychological heft to the proceedings.

The trick, one supposes, is to balance innovation with tradition. There are beautiful women (Naomie Harris and Berenice Marlohe), an appearance by Bond's Aston Martin DB5 and a prologue that has Bond toppling onto a speeding train, as well as a bit in which the world's most famous spy races a motorcycle across rooftops in Istanbul. But Skyfall remains as much about propelling Bond into the 21st century as it is about delivering the winking thrills of yesteryear.

Maybe that's why Skyfall's most weirdly flirtatious scene takes place when the blond, soft-spoken Silva captures Bond and taunts him with homoerotic advances. For his part, 007 remains unfazed. 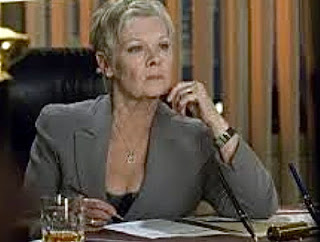 The need for redefinition pervades just about every aspect of the movie. M, the fabulous Judi Dench, is under threat from a bureaucrat (Ralph Fiennes) who thinks it's time for her to retire. The venerable Q has been replaced by a youthful version, played here by Ben Whishaw. Gadgetry seems to have been kept to a minimum.

Even the movie's climax feels a bit shrunken. The action eventually shifts to Bond's boyhood home in Scotland, where an old mentor (Albert Finney) is enlisted to help beat back Silva and his minions, who put the house (not fondly remembered by Bond) under severe assault. You get the idea: The scale of the picture exceeds the grandeur of its themes.

This being the 50th anniversary of the indestructible Bond franchise, it's fair to say -- as I already too much have -- that Skyfall is committed to entertaining while perpetuating the series. It continues the exciting, often intriguing and clever retooling of the Bond mythology, but what's really at stake isn't the continued existence of a weary, threatened world, but the future of Bond himself.

Physically powerful and much less prone to puckish humor than any of his predecessors, Craig may just carry Bond into the future with will, muscle and a severely knotted brow. Bond, as you'll notice, accepts each new assignment "with pleasure.'' It's to Craig's credit that we feel as if there also will be equal amounts of pain.