A father/daughter comedy with bite 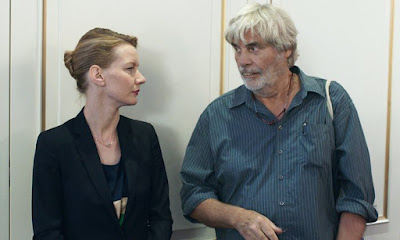 I saw the German comedy Toni Erdmann some time ago, so I was surprised when checking credits to note that the movie lasted for nearly three hours. I guess that's a good thing because rather than remembering the movie's length, I recalled that it made me laugh, even as it made me wince.

That's because of the way Toni Erdmann made me laugh qualifies as embarrassingly silly. A lot of the chuckles in Toni Erdmann depend on a set of fake, buck teeth, the kind that a decidedly non-funny person might use as a running gag. Only in the case of director Maren Ade's comedy, the teeth become a symbol of rebellious iconoclastic behavior, a liberating display of disregard for just about every situation requiring decorous behavior.

The teeth are worn by Winfried (Peter Simonischek), a slovenly, divorced music teacher who seems to loathe decorum in all of its pretentious forms.

Winfried's grown daughter Ines (Sandra Huller) might be the person who's least amused by her father's intrusive ways. She's working for a German company in Romania, and holds herself to exacting, rigorous standards, even if she's a bit disgusted by the compromises her work requires; i.e., cooking up a massive round of layoffs for an oil company client.

The core of the comedy involves Winfried's visit to Bucharest, purportedly for his daughter's birthday. His gift: A cheese grater. What? You don't need one?

Instead of visiting and returning home, Dad stays. He puts on a ludicrous wig and the false teeth, and makes a preposterous claim; he says he coaches executives in the management arts. Of course, Erdmann looks as if he couldn't manage to find a view in a glass house, which is part of the movie's outlandish approach.

Huller's Ines finds her father's pose appalling -- and, in some ways, it is, a display of callous indifference to proprieties others take seriously.

By the end, it has become clear that director Ade has more in mind than wringing cheap laughs out of a pair of false teeth.

At its best, Toni Erdmann qualifies as a satirical shot at the suffocating conformity demanded in a business world that treats people as disposable, as well as a look at the way a daughter ultimately (and surprisingly) accepts her father's cracked but wily wisdom.

Beyond all that, the movie makes room for a rendition of Whitney Huston's The Greatest Love of All and a sex scene involving petits fours. That's enough for any comedy, especially one in which a pair of fake teeth add some real bite.