Forget Mars, this one dies on Earth

The Space Between Us mixes teen romance and sci-fi -- to no apparent avail. 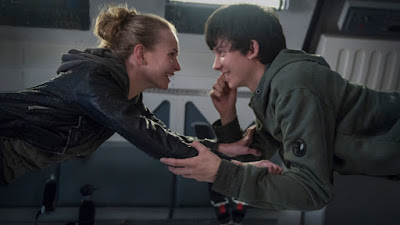 A teen romance decorated with sci-fi frosting, The Space Between Us builds a mush-minded scenario around an effort to colonize Mars, a planet Hollywood never seems to tire of abusing.

After some sketchy initial storytelling about how a colony on Mars has been established, the movie introduces us to 16-year-old Gardner Elliot (Asa Butterfield). Gardner is the only human ever born on Mars, a distinction that stems from the fact that his astronaut mother, was pregnant when she landed on the Red Planet. Mom didn't survive childbirth.

Like any teen-ager, Gardner craves contact with age-appropriate peers; he wants to visit Earth so that he can pursue a relationship with a young woman (Britt Robertson) with whom he's been carrying on an interplanetary version of Skyping.

In addition, Gardner never has met his father; the boy's search for Daddy becomes another thread in a predictable tapestry that mixes budding romance and fish-out-water cliches when the lonely, soulful Gardner gets his wish and lands on Earth.

Because he has spent his entire life on Mars, Earth's gravity threatens Gardner's biological system, so much so that if he remains on Earth, he could be doomed. Ready for a metaphor? Gardner's heart has become dangerously enlarged.

Before Gardner begins to fade, he and Robertson's Tulsa race around the country in variety of cars they steal, apparently without repercussion. The feisty (and annoyingly brash) Tulsa becomes Gardner's guide to Earth-bound living, as well as his love interest.

Director Peter Chelsom's (Hannah Montana: The Movie and Shall We Dance) doesn't create a seamless fit between teen-movie scenes and images of spaceships, the colony on Mars (dubbed East Texas) or any of the movie's other mildly futuristic touches.

Neither credible nor fanciful, The Space Between Us travels the vast distance to Mars and back, but winds up going nowhere.