He's back -- and brutal as ever

Keanu Reeves reprises his role as John Wick, a reluctant hitman who piles up a staggering body count, and keeps fans of the series happy.. 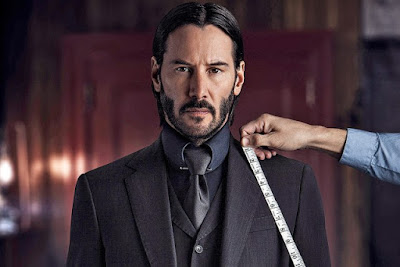 In John Wick: Chapter 2, Keanu Reeves -- as the title character -- amasses a staggering body count with a pointed efficiency that befits his status as a professional hitman. And when Wick fights with his fists (and legs), the ensuing symphony of hyper-grunts creates its own gritty eloquence.

Reprising his work in the 2014 hit, Reeves takes a substantial beating as the film progresses, and Chapter 2 boldly whirls its way through car carnage and carefully orchestrated mayhem spread across a variety of intriguing and well-selected locations -- from the catacombs of Rome to the subways of New York City to the Metropolitan Museum of Art.

Picking up where the first movie left off, the movie concocts a scenario in which hitman Wick quickly finds himself pulled back into the action. He's asked to pay back a debt. In Wick's world, this means he must return a favor by assassinating someone.

Chad Stahelski, who co-directed the first installment, goes solo in this effort, pushing the action into new corners, and following a philosophy that insists that no amount of violent action qualifies as too much.

Another hitman, Santino D'Antonio (Riccardo Scamarcio), supplies the villainy. D'Antonio tries to manipulate Wick, and eventually to kill him -- with an assist from every hitman in New York.

Ian McShane portrays the urbane head of the Continental, a Manhattan hotel where hitman can relax (no slaughter allowed); a deadpan Lance Reddick works the hotel's front desk, and Laurence Fishburne, who appeared with Reeves in the Matrix, enjoyably chews as much scenery as possible as head of a team of hitmen who pose as New York City street people.

The Continental's sommelier (Peter Serafinowicz) adds a Bond-like touch, dispensing weapons while employing the vocabulary of a wine connoisseur.

You'll also see Common as another hitman. Like Wick, he's a pillar of stoicism. Little in this second chapter relies on expressive acting -- at least from the movie's hitmen. Killing without discernible affect might be the movie's idea of the noblest of human virtues.

Perhaps so that women don't feel excluded from this cinematic wild ride, Ruby Rose has been cast as a deaf-mute killer who communicates with Wick by signing.

From the movie's opening prologue -- Wick drives a Mustang that becomes a target for other cars -- it's clear that this second installment will rely on battering overstatement. A far-fetched plot about a global network of assassins provides a frame on which to hang the action, which, by the end, even resorts to the shopworn Hall of Mirrors effect -- and pretty much pulls it off.

Be assured, the violence never shies away from brutality of a kind that occasionally elicited audible gasps from a preview audience, a recognition that being shot or stabbed in certain areas of the body qualifies as excruciating to the max.

Reeves's barely buried fury sets a tone of semi-seriousness that director Stahelski maintains, creating a giant, grind-house conspiracy between the audience and a movie that loads up on chaos. We all know the movie is preposterous, so it doesn't have to wink at us.

And, yes, Wick once again has a dog, a conceit that forces us to worry over the animal's fate. And, yes, the door is open for another sequel, which I'm guessing will become inevitable after this chapter finishestearing up the box office.