MY LIFE AS A ZUCCHINI 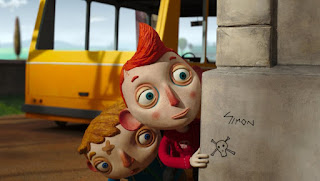 What easily could have become a Dickensian nightmare turns into a deeply humanistic bit of stop-action animation in director Claude Barras's My Life as a Zucchini (Ma Vie de Courgette). Based on a novel by Gilles Paris, the movie follows a grim outline. A nine-year-old boy finds himself in an orphanage after the death of his alcoholic mother. The boy believes he is responsible for his mother's demise. Perhaps that's why he insists that everyone call him "Zucchini," a term of endearment his otherwise abusive mother used. Once in the small orphanage, Zucchini meets a boy whose parents were drug addicts and a girl who witnessed her jealous father commit a terrible crime. All of the kiddie characters have suffered childhood traumas, but Barra tempers the story to allow for nuances that redeem the bleakness. The policeman who takes young Zucchini to the orphanage turns out to be an empathetic soul, the folks who run the place really care about the kids, and the kids often enjoy playing together. Zucchini -- his real name is Icare -- has been designed with large round eyes that look like reservoirs for his damaged emotions, and My Life as a Zucchini emerges as a touching picture of childhood, complete with its pains and consolations -- and (amazingly) an allowance for kindness. 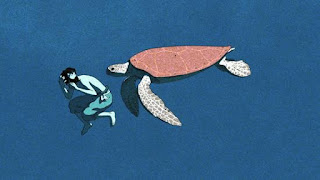 Dutch animator Michael Dudok de Wit collaborated with Japan's Studio Ghibli to create a wordless animated portrait about a shipwrecked man stranded on an island. Despite its adventure trappings, The Red Turtle becomes a metaphor for the ways a life can unfold as this nameless fellow tries to break down his isolation. At first, he makes multiple attempts to leave the island on a raft he builds from wood retrieved from a forest. The man's efforts constantly are frustrated by a giant red sea turtle that keeps sinking his makeshift vessel before it can get too far away from the shoreline. When the turtle washes ashore, the man furiously rolls it on its back and clobbers it over the head. Not long after he kills the turtle, a beautiful young woman emerges from its shell. Man and woman strike up a relationship that carries the man through the rest of his life. The spare beach island settings contrast with thick greenery where the man and his companion gather food. Dudok de Wit has little interest in rendering a realistic portrait of a marooned life. For him, animation becomes a medium that allows him to reduce existence to what he may see as its essentials, our need for others and, ultimately, the inevitability of losing them. Dudok de Wit has made an absorbing and captivating little movie.
Posted by Robert Denerstein at 1:10 PM