This 'Wall' is far from great

Matt Damon joins director Zhang Yimou for a giant helping of spectacle -- and little else. 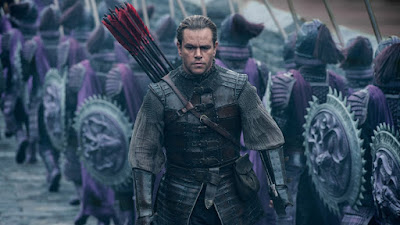 Can a wall protect a country's capital from being overrun by hordes of lethal monsters?

No, we're not talking about a debate on the Senate floor, but about a large-scale movie that turns Matt Damon into a western warrior enlisted in a Chinese battle to preserve humanity.

Directed by Zhang Yimou and shot entirely in China, The Great Wall may not totally crumble, but it doesn't rise to epic standards, either.

And for cineasts, the movie hardly marks a milestone. Zhang made his entry on the international stage with Red Sorghum (1987). He continued with Ju Dou (1990), Raise the Red Lantern (1991) and Shanghai Triad (1995). He was regarded as a young master of what was known as the Fifth Generation of Chinese filmmakers, and his work was bolstered by the presence of the beautiful and talented Gong Li.

In later movies such as Hero (2002) and House of Flying Daggers (2004), Zhang began turning out highly stylized martial arts films. And in 2008, he directed the opening ceremony of the Beijing Olympics.

Now comes The Great Wall, a movie whose only virtues involve costumes, spectacle and CGI-enhanced action. It seems to derive less from Zhang's earlier work than from his spectacular Olympic contributions.

Burdened by stock characters, wooden dialogue (much of it in English), and lame attempts at humor, the movie offers a less-than-stirring rendition of a legend about creatures that storm China's Great Wall in an effort to reach the capital.

The movie's dragon-like creatures -- Tao Tie by name -- are connected to a finger-wagging theme. It seems the monsters emerge every 60 years, which evidently coincides with society having become too greedy for its own good.

The Great Wall feels overly calibrated for international success with lots of action, some of it impressive. The first assault on the Great Wall (here serving as a fortress protecting the capital) involves archers in red armor and women in blue armor who leap off towering platforms to spear the dragons. If color could kill, these warriors would have no equal.

There's a whisper of a story. Damon portrays William, a western mercenary who has traveled to China with his warrior pals in hopes of cornering the gunpowder market. After most of his comrades are killed in early-picture skirmishes, William and his pal Tovar (Pedro Pascal) become prisoners of the Nameless Order, the army that occupies the Wall, executing its various maneuvers to a variety of compelling drum beats.

There's spectacle, but much of it feels underlined to elicit oohs and aahs: a scene in which thousands of lanterns are borne skyward in tribute to a fallen general, for example.

Willem Dafoe signs on as a character who also came to China in search of gunpowder, but who has been kept inside the great Chinese redoubt for 25 years. He wants to help William and Tovar escape so that he, too, can make his way back to the western world with plenty of gunpowder in tow.

The Chinese display a variety of weapons, but William pretty much sticks to archery. His skill as an archer impresses his captors. Eventually, his prowess is recognized by Lin (Jing Tian), a woman commander. She leads the squads of blue-clad female warriors who leap off the side of the Great Wall, doing their lethal work before being hoisted back up.

There's a bit of a moral here -- albeit a hackneyed one. Will William cling to his mercenary values or will he fight for a higher ideal, as in helping to save the unsuspecting residents of the capital? The Chinese understand higher ideals: trust and sacrifice. The Westerns are decidedly more crass.

A lack of stand-out performances (Damon included) doesn't help to turn the movie into anything more than a display of visual extravagance. And there's virtually no suspense in wondering whether -- in the end -- Damon's William will do the right thing.

I won't say more about whether the Tao Ties eventually reach the capital. But I will say that our president might do well to watch this movie because it says something about the effectiveness (or lack thereof) of walls when it comes to defending the populace from invasion.