An isolated woman deals with loss

Director Pedro Almodovar blends stories by author Alice Munro and makes them his own. 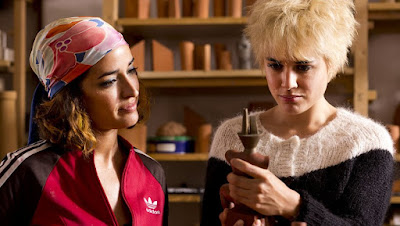 Pedro Almodvar, the fine and often cheeky Spanish director of movies such as Women on the Verge of a Nervous Breakdown, The Skin I Live In and Talk to Her, always has been as much interior designer as movie director. In an Almodovar movie, everything from hair styles to wall paper take on evocative meaning.

Of course, all filmmakers pay attention to such details, but with Almodovar the icing and the cake often carry equal weight.

Beyond that, Almodovar's fluid camera creates a cinematic richness that's difficult to resist -- even when the director isn't working at peak form, as probably is the case in Almodovar's latest, Julieta.

Loosely basing his movie on several stories by Canadian author Alice Munro, Almodovar focuses on the title character at two distinct stages of her life: as a young teacher (Adriana Ugarte) and as a middle-aged woman (Emma Suarez).

We meet the older version of Julieta as she's about to leave Spain for Portugal with a grateful and admiring lover (Dario Grandinetti). But Suarez's Julieta backs out at the last minute, deciding to remain in Madrid. She leaves her upscale apartment, and moves into an building she occupied when her now-grown daughter was a teen-ager.

The story then introduces us to the younger Julieta, a woman whose life changes when she meets a young fisherman named Xoan (Daniel Grao) on a train. Julieta and Xoan have an affair; she becomes pregnant. Julieta moves to a small seaside town to be with Xoan.

Xoan's housekeeper (Rossy de Palma) doesn't take to Julieta, but she's totally attached to Xoan and, then, to Julieta's child, Antia. We also meet Ava (Inma Cuesta), a sculptress who was one of Xoan's lovers -- and, on occasion, still may be.

Julieta's daughter becomes the source of the middle-aged Julieta's torment as Almodovar creates a massive generational gulf. Neither mother nor daughter can deal with tragedy, and both are mired in recrimination.

Young Antia vanishes, after participating in a mountain retreat. She hasn't been in touch with her mother in more than a decade. When Julieta settles into her depressing new digs, she begins to write letters to the daughter with whom she's lost touch. These letters serve to explain why Julieta now lives in isolation.

As much as any director, Almodovar loves the movie image, and that love often redeems his movies. In the case of Julieta, the director has found material that takes him to a familiar place: the trials of a woman who responds to a chance meeting that turns into ... well ... a life.