The story of a ground-breaking author

Keira Knightley plays the title character in Colette, a movie that's as much period piece as character study. 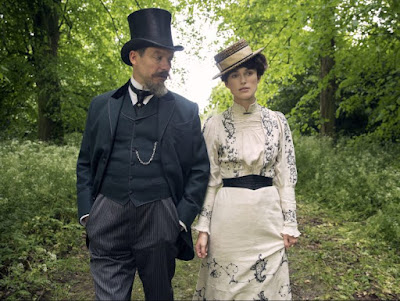 Colette, the French novelist, died in 1954 at the age of 81. The movie Colette focuses on roughly a quarter of Colette's fascinating life, notably the years she spent with her first husband, Henry Gauthier-Villars, a man who published under the name Willy. Colette wrote the famous Claudine novels, but Willy took credit for them.

A bon vivant, literary entrepreneur and music critic, Willy hired others to author books to which he proudly put his name. His major talent seems to have been for promotion, which suggests that he may have been born a century too soon.

Colette, who was 14 years younger than Willy, eventually divorced him. She went on to have a distinguished literary career, as well as a personal life that included two additional marriages and various relationships with women.

As far as it goes, Colette proves enjoyable with Keira Knightley bringing a sense of fiber and substance to the role of Colette and Dominic West immersing himself in a convincing turn as man who relied on preening charm, profligate spending, and a charismatic personality.

Westmoreland doesn't shortchange Colette's adventurous sex life, presenting one episode in which Colette has an affair with an American woman who's visiting Paris (Eleanor Tomlinson). So, by the way, does Willy. Colette also establishes an on-going relationship with Mathilde de Morny (Denise Gough), an aristocrat and gender rebel who shocked polite society by dressing like a man.

Colette and Willy tolerated each other's sexual digressions; according to the movie, Colette prized honesty more than she valued fidelity. Willy agrees, but he’s not quite up Colette’s demanding standard.

Part tale of feminist assertion and part portrait of turn-of-the-century Paris, Colette engages without generating sustained excitement for a title character whose sharp edges have been buffed into submission by what may be a little too much production value.

Colette likely will be appreciated more as carefully appointed, nicely acted period piece than a provocative look at a woman who didn't so much challenge norms as bypass them with blithe indifference.

Put another way, Colette presents its subject with honesty but never throws down the gauntlet of challenge that would have pushed audiences out of their comfort zones, something Colette deserved.