A court corrupted by ambition 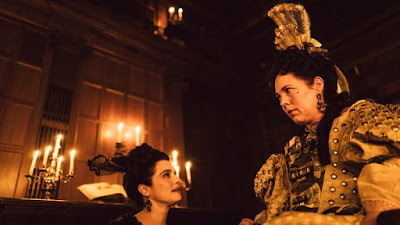 The moral decadence of an aristocracy has been carried to ridiculous (and, yes, instructive) extremes in director Yorgos Lanthimos's The Favourite. Set in the 18th-century court of Britain's Queen Anne, The Favourite laces an irresistible story with strong doses of intrigue, sex, betrayal, lust, and power. All that makes for a meal that should satisfy the most voracious of thematic appetites.

The Favourite doesn't pass muster as accurately portrayed history or entirely caustic drama; it exists in a world that floats between those two poles, dispensing amusement and rue as if they were party favors at a festival of human folly. Lanthimos has created a world that conjoins conniving ambition with the preening excesses of a court where the events of the day (a war to name one) are kept at an antiseptic distance.

One aristocratic faction opposes the continuation of a war with France on monetary grounds. The anti-war nobles have grown weary of financing it. Another faction sees the war as vital to the kingdom's security.

Issues of the 18th century aside, The Favourite seems particularly attuned to the current moment, reminding us that politics often eschews substance as it wallows in baser impulses of vindictive self-interest.

The story centers on three women. Queen Anne (Olivia Colman) becomes an object to be manipulated: She's a childish, impetuous monarch who falls victim to her moods and to her physical maladies. Her gout makes her moan, cry and walk with a limb.

Rachel Weisz portrays Lady Churchill, Duchess of Marlborough, confidant and chief adviser to the queen, as well as her lover.

Last, but by no means least, is Emma Stone's Abigail, a Churchill cousin who arrives at the court in gravely reduced circumstances. Abigail becomes a protege of Lady Churchill and eventually tries to surpass her in influence.

Sex, as seen here, relates neither to love nor lust: It has become currency to be dispensed when necessary in the quest for personal advancement or to secure one’s position.

Colman, in one of the year's best performances, creates a queen of deep sadness and flighty temperament. Every now and again, Anne remembers that she's in charge and issues an irrefutable order, probably to remind herself that she’s at the top of this aristocratic heap.

Weisz's Churchill mixes sharp intelligence and cunning into a poisonous cocktail that shows trace elements of actual conviction. Stone follows suit in the most difficult role, an ingenue who knows how to keep her talons concealed. Abigail eventually connives to marry an empty-headed young man (Joe Alwyn) for reasons that serve her ambitious purposes.


Beautifully upholstered in foppish finery, the court becomes an arena in which these noble souls compete, perhaps because without intrigue their lives would choke on vapidity and boredom. The men in The Favourite come across as powdered peacocks who strut about while ostensibly fretting about weighty matters of state.

Lord Harley (Nicholas Hoult) sports rouged cheeks and a wig. He's angling to advance his political position as chief opponent to the war with France.

At one point, we see the nobleman behaving like silly fratboys, tossing oranges at one their naked companions, who attempts to dodge the splatter. They also engage in indoor duck racing, a sport that happily did not survive the 18th century.

The queen has her own preoccupations: She keeps pet rabbits that run around her chambers, furry substitutes for the 17 children she lost to death.

Lanthimos heretofore has been known for The Lobster and The Killing of the Sacred Deer, movies that many found indigestible in their strangeness. By comparison, The Favourite comes off as quite accessible, although closer observation will reveal much of the weirdness that has defined Lanthimos' work, this time emphasized with fish-eye lenses and a mood of sustained madness.

Steeped in human dereliction, The Favourite certainly can't be accused of dreariness. Screenwriters Deborah Davis and Tony McNamara keep the story moving and don't stint on expressions of profane wit.

All of this is brought to an astonishing conclusion with close-ups, one of Queen Anne's face on which Lanthimos practically bets the entire movie. He asks Colman to reveal the queen's mental and emotional state after so much plotting and deceit. Colman more than makes Lanthimos' bet pay. Anne's look at the end of this engaging, disturbing and gleefully malicious movie proves unforgettable.