A mom tries to save her drug addicted son

Julia Roberts and Lucas Hedges give strong performances but Ben is Back can seem like a movie divided against itself. 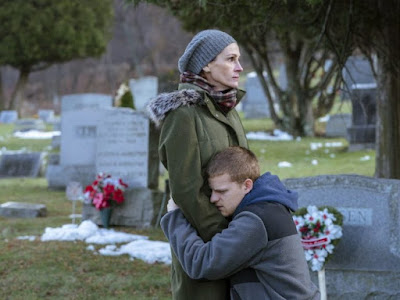 Ben is Back, the story of a mother dealing with her son's drug addiction, proves observant and smart -- until a mid-picture plot twist alters its course.

A convincing Julia Roberts portrays Holly Burns, a mother who’s shocked to see her addict son Ben (Lucas Hedges) make an unannounced visit to the family's upstate New York home. Ben, who's supposed to be in rehab, claims that his sponsor endorsed the trip.

After many attempts to deal with Ben's addiction, Holly is happy to see her sober son, but she'd be a fool not to worry. Hadn't everyone agreed that Ben would complete his rehab before he returned to the family? Could this visit be a prelude to yet another failed attempt by Ben to pull his life together? Hasn't Ben already put his family through enough hardship?

Ben's stepfather (Courtney B. Vance) is appropriately skeptical, as is Ben's younger sister (Kathryn Newton), another child from Holly's previous marriage. Two children from Holly's current marriage are too young to feel anything but delight at the appearance the playful big brother who treats them with obvious affection.

Ben's return prompts tension but Vance's Neal and Holly negotiate a deal: Ben can stay for one day. There are conditions: He must agree to drug testing and he's never to leave Holly's sight.

Holly's love for her first-born is palpable. She wants to believe that her faith in Ben can bring him back from the brink of self-destruction. Hedges' performance makes it clear that Holly isn't entirely deluded. Ben has many admirable qualities: He's smart, capable of love and seems open and realistic when talking about his addiction.

During a particularly stressful moment, he even insists on attending a meeting of fellow addicts so that he can talk through his anxieties. Holly goes with him.

This portion of the movie gives Hedges an opportunity to suggest some of the damage that Ben has left in the wake of his addiction, most notably his relationship with the mother (Rachel Bay Jones) of one of his former girlfriends, a young woman he introduced to drugs.

The movie shifts gears when the family returns home from church on Christmas Eve and discovers that the house has been visited by intruders who've made off with the family dog.

Ben knows that the intruders want to scare the family and that they are connected to his former life.

Hedges' screenplay then finds another gear: Holly accompanies Ben as he makes contact with people from his worst days and what has been a carefully observed family drama takes on a new dimension.

Roberts and Hedges do their best to sell this part of the movie -- encounters with a string of unsavory types -- but I found Holly's behavior difficult to buy, perhaps because the screenplay doesn't adequately explore the impact of her persistence on the rest of the family. The effect she's having on Vance's mostly patient character is clear, but also underexplored.

There's no faulting the work of either Roberts or Hedges. Hedges, also seen in the recently released Boy Erased, understands and makes real the duplicitous ways of an addict, but the movie eventually pushes the larger family dynamics aside to concentrate its focus on mother and son.

It's possible to think of Ben is Back as a kind of companion piece to Beautiful Boy, another movie about a parent -- in that case, a father -- trying to cope with a son's addiction. The release of the two movies at roughly the same time may be coincidental but clearly suggests that middle-class addiction has become a national preoccupation.

Based on a true story, Beautiful Boy tries to pull its drama from reality; Ben is Back takes a fictional approach to finding its truth. In the end, neither movie totally succeeds, but both have moments that tear at the heart.