No point beating around the bush, Roma is the year's best movie. 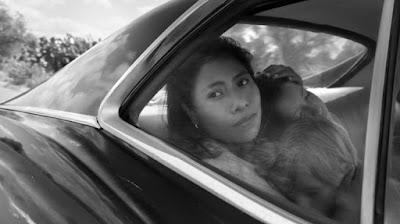 I have a suggestion that might enhance your appreciation of Roma, the Alfonso Cuaron movie that rightly has been hailed as a masterpiece. If you possibly can see the movie, shot in black and white and making exquisite use of a wide-screen format, do so. Then go to Netflix and watch the movie in the original Spanish with the sound off. I think you'll see just how much of Cuaron's semi-autobiographical memory movie communicates visually.

Sounds obvious, I know. But think about how much most movies rely on dialogue, music and flashy edits to get their point -- if they have one -- across. Cuaron, who also served as the movie's cinematographer, has made an image-rich movie that relies on his camera to capture the lives of characters and expand beyond that to provide insight into the society in which they live.

Working at peak form, Cuaron, at one point, approaches a single street as a canvas, gliding his camera along its length in a way that brings the chaos and vibrancy of Mexico during the 1970s to life.

Mexico City provides the stage on which Cuaron sets the story of the household in which he presumably grew up. His neighborhood was called Roma, a slice of the city in which residents lived behind locked gates and employed help to keep their households running.

The movie's amazing opening shot, the slow reveal of an airplane reflected in pools of water from a maid's daily cleaning of the family's courtyard -- suggests faraway life, something out of reach for the movie's main character, Cleo (Yalitza Aparicio). She's the maid who keeps the machinery of the house oiled. Her duties include everything from cleaning up dog poop in the courtyard to doing laundry by hand on the roof to comforting the family's four children.

The meticulously kept downstairs of the house contrasts with the messy upstairs, where most of the actual living takes place. It quickly becomes apparent that trouble looms. When the head of the house (Fernando Grediaga) arrives home, he barely squeezes his over-sized Ford into its courtyard parking spot. It's as if something about him has outgrown the life inside.

It's not long before, Dad -- a physician by trade -- leaves home on a "business" trip. He doesn't return and Mom (Marina de Tavira) begins to unravel. Cleo also has an experience with a fleeing male.

She dates a young man (Jorge Manuel Guerrero Mendoza) who happens to be the cousin of the boyfriend of another of the household's maids (Nancy Garcia). After Cleo and Mendoza's Fermin have sex, he emerges from the bathroom naked and does a bizarre martial arts demonstration that serves as a kind of stark primer on Mexican machismo.

It's immediately clear that Fermin isn't going to win any sensitivity contests. Later, Cleo tells him, as they're necking in a movie theater, that she's pregnant; he excuses himself to go to the bathroom and never returns.

An awful lot happens during Roma, but the movie never feels stuffed. Not only do we become intimately acquainted with the household in which Cleo works, but we're immersed in events of the day - from an earthquake to student protests that turn violent and serve as a prelude to the movie's most devastatingly painful scenes.

At one point, Mom decides to take the family to visit rich friends for a New Year's celebration. Cuaron then assembles a sequence that includes hunting, pistol firing and some of the most bizarre examples of taxidermy yet to be seen on film.

Suddenly, we're in Fellini territory, but we've arrived without self-conscious attempts at mimicry or insider gestures. It's all part of the fabric that Cauron weaves and which includes a visit to the poor part of the city where Cleo attempts to reconnect with the vanished Fermin.

Cuaron's juxtaposition of the bizarre and the quotidian never feels forced and Roma unfolds with such apparent effortlessness that its truth seems unquestionable.

When the family takes a beach vacation, Cuaron does stunning work as his camera follows Cleo into the waves. I won't say more about what she's doing, but -- as is the case with much of the movie -- I watched with amazement at the effect Cuaron achieves.

Cleo genuinely loves the children of the household and they clearly love her. Of course, there's an inherent inequality in the relative positions of employer and employee that adds a painful undercurrent to everything that transpires.

Cuaron obviously is one of the boys in this on-screen family, but Roma isn't about children or even childhood; it's a movie about a moment and the people who lived it.

So back to where I started. I encourage you to see this movie twice. Get the lay of the land, know the story and then see it without sound so that you can fully appreciate the wonder of Cuaron's camera work, the exactitude of his eye and the clarity of a heart that understands the deep sadness and transient beauty of fading time.