A family that steals together

Shoplifters qualifies as one of the year’s best movies. 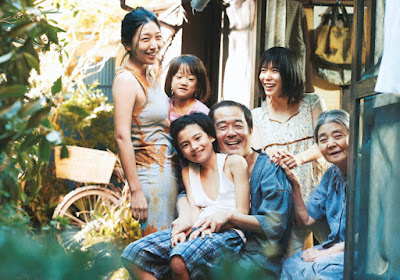 Director Hirokazu Kore-eda won the top prize at Cannes this year for Shoplifters, a movie steeped in the kind of understatement that lulls us into acceptance as Kore-eda works his way toward an emotionally powerful conclusion.

Kore-eda (After Life, Nobody Knows, Still Walking and Like Father, Like Son) has made a career out of quietly upending expectation. This time, he introduces us to a family that shoplifts in order to eat.

Although their survival may be based on larceny, the Shibatas are basically happy and devoted to one another. The father of the clan (Lily Franky) intermittently works on construction projects but also operates under a logically dubious credo: He argues that taking things from stores isn't really stealing because these items don't yet belong to anyone. To make this clear, the movie begins with Franky's Osamu and his 12-year-old son Shota (Jyo Kairi) on a "shopping" expedition.

The rest of the family includes a mother (Sakura Ando), an older sister (Mayu Matsuoka) and a grandmother (Kirin Kiki).

In case those characters don't represent enough of a tribe, the family takes in a stray, five-year-old Juri (Miyu Sasaki). Osamu and Shota discover the child freezing on a balcony: She seems to have been abandoned and abused. Kidnapping? Of course, but Kore-eda never underlines anything. It doesn’t take long for us to believe that as a part of this impoverished family, Juri's better off than she was.

Kore-eda excels at injecting volatile movie elements (kidnapping, theft, etc.) into situations that seem entirely ordinary, even banal. As a result, we go with the flow, which turns us into co-conspirators of a sort and widens the movie’s thematic reach until it touches the borders of social statement.

We're unsettled by the idea that the obviously bright Shota doesn't attend school, but once again, a disturbing detail becomes a matter-of-fact addition to the lives we've been observing.

Gradually, Kore-eda allows a plot to unfold and the family faces severe challenges. We shouldn't be surprised. This group scrapes by in a cramped one-room home and surely, we know that a life supported by shoplifting doesn't qualify as highly sustainable.

And, of course, this family isn't quite what it seems. I won't say more. But Shoplifters has less to do with plot twists than with finding the pathos in marginalized lives that we've come to care about thanks to Kore-eda's keenly observed treatment of them.