Mary Queen of Scots can't bring its intriguing ingredients to a dramatic boil. 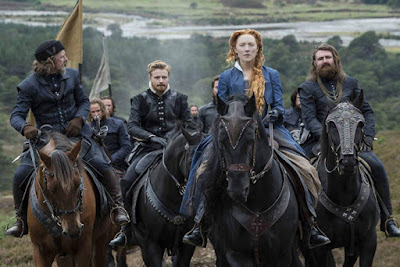 Mary Queen of Scots tells a story that drips with political intrigue, religious strife, personal betrayals, and even murder.

Despite all that and despite a couple of winning performances from Saoirse Ronan and Margot Robbie, the movie too often fails to bring its many volatile ingredients to a dramatic boil.

The story centers on the rivalry between Ronan's Mary and Robbie's Elizabeth I. Newly widowed at 18, Mary arrives in Scotland from France, where she evidently learned the art of tolerance. Surrounded by her all-male gaggle of courtiers, Elizabeth fears that Mary won't be content to rule over Scotland, but will try to take over her throne, as well.

Director Josie Rourke, working from a screenplay by Beau Willimon (House of Cards), alternates between the 16th-century British and Scottish courts, making clear -- in somewhat interminable fashion -- the contrasts between the two women.

As for those differences: Mary is Catholic; Elizabeth, a Protestant. Mary seems the more natural and fresh-faced of the two with Elizabeth, who contracts a terrible case of the pox during the movie, looking as puffed and powdered as a show poodle.

Ronan brings youth, intelligence and plenty of backbone to the role of Mary. Robbie's make-up threatens to overwhelm her performance, but she manages to allow real feelings to creep through.

In what might be taken as a bow to current sensibilities, both Mary and Elizabeth preside over multi-racial 16th-century courts. There's also gay sex, oral sex and lots of grumbling courtiers, some of whom make an impression, notably Guy Pearce's William Cecil, an advisor to Elizabeth and an all-around stuffed shirt.

James McArdle portrays Mary's hirsute half-brother. Ismael Cruz Cordova plays a gay man who likes to hang with Mary and her crew of gentle-ladies and who also has a roll in the hay with Mary's second husband (Jack Lowden). David Tennant portrays John Knox, a Scottish zealot who rails against Mary's Catholicism and what he sees as her sexual abandon.

For those unfamiliar with British history, the movie makes it clear from the outset how all this back and front-stabbing will conclude. Rourke begins with Mary's impending beheading and works her way back through the story.

Scotland looks far more primitive than Elizabeth's London court but the movie's glamor has more to do with the two queen's architectural hairstyles than with any aristocratic splendor.

And it may be a nod to current standards to suggest that Mary and Elizabeth shared a sisterly fate as the men of their respective courts attempt to push them around.

Mary Queen of Scots doesn't have the musty feel of period-bound drama but it doesn't spring to vivid life, either. So, no hails for this queen.

By the way, and of no relevance whatsoever, I'm waiting for someone to use this title as inspiration for another movie, namely Mary Scot of Queens Tell me you aren't ready for it.