Pop, violence and an attempt to say something

Powerful moments in Vox Lux don't quite add up. 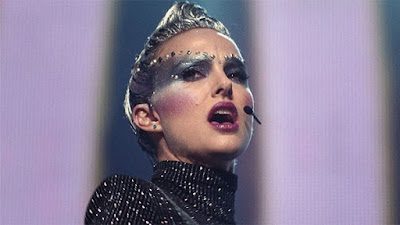 Director Brady Corbet's Vox Lux might be a case of a movie taking a bite out of a big subject but failing entirely to digest it. Filled with pretentious title cards (Act I: Genesis 2000-2001, for example), the movie begins with a school shooting and propels itself toward a portrait of a pop star who's having a bad moment, perhaps after a long series of bad moments involving sex, drugs, and alcohol and trauma dating back to her high-school years.

Corbet opens the film with a riveting display of violence that takes place in the music room of a Staten Island high school. After suffering grave wounds, high-schooler Celeste Montgomery (Raffey Cassidy) writes a mournful song with her older sister (Stacy Martin). Because she's seen as a bona fide national victim, Celeste's song becomes a sensation.

Celeste's career rises from her horrific experience -- with help from a manager, played by Jude Law with an attitude of hard-boiled pragmatism.

Cassidy does a fine job of showing how Celeste -- with help from her sister -- begins to taste the high life that accompanies stardom. Maybe the movie never should have left those teen years in which Celeste still hasn't found her footing.

Natalie Portman takes over the movie's second half as the grown Celeste, who we meet on the day she's supposed to play a concert in her hometown. Natalie is having an awful day for a variety of reasons: She's arguing with her sister, trying to come to terms with her teenage daughter Albertine (also played by Cassidy) and meeting with a press corps that's bound to ask questions about the connection between one of Celeste's videos and another violent incident, a mass shooting on a beach in Europe.

Corbet plunges violence, celebrity, and cultural degradation into a jumbo-sized package as the movie searches for hyper-meanings. But the movie feels most convincing when it isn't reaching for thematic gold but making smaller observations, like how a journalist interacts with Celeste after being warned by a record company executive to stay away from certain subjects.

In a scene between Celeste and her daughter in a Manhattan diner, Corbet's camera generates the kind of uncomfortable immediacy that makes us a third party to their conversation.

But Portman's version of Celeste -- complete with leather jacket, baggy jeans, a New York accent and tons of attitude -- seems forced. To me, her performance screamed of striving more than it suggested a believable character.

Corbet's style, which comes on like fragments from a vivid dream, can't compensate for what I saw as the movie's lack of clarifying viewpoint about the amorphous web that's woven from elements of fame, violence and pop culture.

With Celeste vying for the title of the year's most unpleasant character, Vox Lux sweats its way toward something I think we're meant to take as seriously as the intermittent narration offered by an off-screen Willem Dafoe.

All I can say is that I tried, but I also wondered if effort (a palpable sense of reaching for something) didn’t outweigh the movie’s overall achievement.