A 'Spider-Man' that's long on creativity

A Marvel story that's (gasp!) actually animated and better for it. 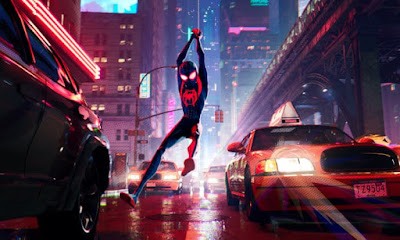 Who knew? In the complex and baffling expanse of comic-book realities, a Spider-Verse awaits. We're talking about alternate universes or dimensions where many Spider-Men assume their crime-fighting burdens. To make Spider-Man: Into the Spider-Verse even more intriguing the familiar Spider-Man -- a.k.a. Peter Parker -- almost immediately falls victim to Kingpin, a gargantuan villain whose girth seems to represent a lifetime of accumulated evil.

Oh well, those of us who grew up before the current wave of Marvel comics broke across the culture may not have known all this, but it probably comes as no surprise the legions of fanboys who were nurtured by Stan Lee's cornucopia of comics.

As if to bow to the origin of all things Marvel, this edition of Spider-Man is animated by a gifted team that wisely has given the movie the texture of an actual comic book with visible Ben-Day dots, panels, and occasional captions.

It's a bit early in the review to introduce a footnote, but for the record: Chris Pine gives voice to the original Peter Parker, who, as mentioned, succumbs early. Liev Schreiber voices Kingpin.

Kingpin, by the way, has an associate named Dr. Octopus (Kathryn Hahn). She has something to do with the technology that allows the various multi-verses to mingle -- or some such.

Now back to the review:

This time, the main character carries a welcome ethnic banner. Miles Morales (Shameik Moore) has black and Hispanic origins. Miles feels a little out-of-place at the private school to which his parents (dad is a cop) have sent him.

School aside, Miles starts the movie as an ordinary Brooklyn kid. He transforms into Spider-Man after being bitten by a radioactive spider. The bite occurs in an abandoned subway station that Miles visits with his Uncle Aaron (Mahershala Ali), a free-spirited guy who Miles idolizes and who serves as a counterpoint to Miles conventional father.

A variety of other characters pop into the movie from other dimensions. They include Gwen (Hailee Steinfeld), Peni Parker (Kimiko Glenn), Peter Porker (John Mulaney) and Spider-Noir (Nicolas Cage). Porker, by the way, functions as a cartoon addition to this gang of Spidery characters and has an inspired alternate name: Spider-Ham.

You may find yourself blinking in mild but amused disbelief at the alternate universe Peter Parker, a Spider-Man who seems to have aged a decade and who has acquired a paunch.

All of these Spider-folks add to an approach that sets the movie several cuts above the expected. Getting rid of live action has resulted in one of the most creative Marvel movies yet with a plot that centers on the alternate-universe characters trying to return to their home dimensions.

My appreciation for the movie's spirit of invention never wavered; Spider-Man: Into the Spider-Verse dazzles the eye and deservedly has put itself into contention as the year's top animated movie.

Credit goes to the directing team of Bob Persichetti, Peter Ramsey, and Rodney Rothman, as wells as to screenwriter Phil Lord, who produced with his partner Chris Miller. And don't forget the legion of animators and effects specialists who have created this amazing contraption. Sitting through the end credits will tell you it takes more than a village to make this kind of movie; it takes an army.