Mortal Engines can't find characters to keep us interested in its 'visionary' design. 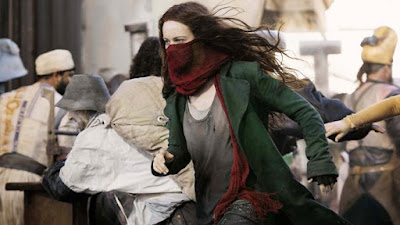 It's not difficult to see why Lord of Rings guru Peter Jackson might have wanted to be involved with Mortal Engines, a big-screen adaptation of a British YA novel by Philip Reeve.

Set 1,000 years in the future, the movie includes a massive version of London that moves through a post-apocalyptic world on giant treads. It also features a balloon habitat that floats in the sky, a variety of scruffy looking characters who could be extras from a Road Warrior movie and a Lazarus Warrior, a once-human creature who gave up memory and pain to become a mostly mechanical creation.

These are the ingredients in which Jackson, who serves as the movie's producer and one of its writers, may have seen mind-blowing visionary possibilities.

Under the direction of Christian Rivers, these possibilities are only partially realized. It's telling, for example, that the movie's Lazarus Warrior -- he's named Shrike -- might be its most interesting character.

The rest of the cast is stuck playing characters who have a generic quality, cardboard cutouts roaming this imaginatively conceived (if seldom plausible) world.

A complicated story involves the evil plans of one of mobile London's big-wigs (Hugo Weaving). Weaving's Thaddeus Valentine has a strikingly blonde daughter (Leila George) who idolizes him but who eventually will be forced to face disillusionment about her father.

This isn't much of a spoiler because the bulk of the action revolves around two other characters. A history buff named Tom (Robert Sheehan) devotes himself to collecting pre-apocalypse memorabilia while harboring dreams of being an aviator. Toasters from "ancient" times fascinate Tom.

The plot contrives to throw Tom into the company of Hester Shaw (Hera Hilmar), a young woman with a scarred face and a deep hatred for Valentine.

Expelled from London, Tom and Hester find themselves on the run but eventually must return to the city to stop Valentine from executing his hyper-destructive plans, which (of course) involve an ambition to make himself the world's most powerful man.

Some of the movie's set pieces (an opening chase in which the mobile London chases a smaller city and "ingests" it) fly by in an entertaining fashion but you'd have to have emerged from a 50-year coma not to know that the initial hostility of Hester toward Tom eventually will turn to love.

The movie manages to wring a bit of humor out of what it calls "old tech," i.e. stuff that's recognizable to audiences in 2018.

Before the movie's great final battle, Tom and Hester visit a city constructed behind a wall and led by a monkish looking Asian man who screams of fictional stereotyping. This, after hooking up with Anna Fang (South Korean pop star Jihae), a pilot with her own agenda and a haircut so severe, it might have edges that cut.

The final battle involves Valentine's deployment of a weapon that would have been at home in an old Flash Gordon serial, but by then, it's difficult to believe anything's really at stake, aside from finding a way to conclude the proceedings.

Oh well, Mortal Engines doesn't generate disdain -- at least it didn't in me -- but it's difficult to avoid thinking that not enough has been accomplished by a scrapheap of a movie that can feel both old-fashioned and old hat.