Danger lurks in a Swedish commune

Director Ari Aster’s Midsommar:: a long (and sometimes repellent) journey toward ... well ... I’m not sure what. 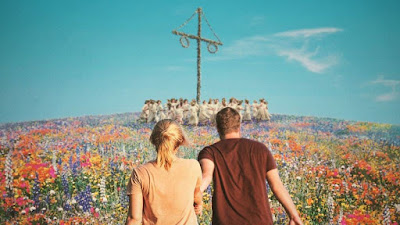 Midsommar could be many things.

-- The movie might be a satire on the preposterous rituals of weird cults.

-- It could be a straight-ahead horror movie about a group of Americans who find themselves in mortal danger when they visit an isolated region of rural Sweden.

-- Or it could be a riff on the ways in which preoccupation with certain concerns (in this case cultural anthropology and careerism) might blind someone to dangerous realities.

-- Perhaps it's about what happens when someone in a dying relationship feels slighted.

I could go on, but let me get to the point: Whatever Midsommar wants to be, it’s also bloody, excessively graphic in its depiction of horror and more than a bit muddled about its intentions. That’s an unfortunate combination for a movie that follows what has been touted as a promising debut feature from director Ari Aster. Aster’s last film, Hereditary, won both audience and critical favor.

This time, Aster begins by establishing an atmosphere of dread in which he sketches the personal dynamics of his characters. A young woman (Florence Pugh) loses her parents and her mentally disturbed sister. She’s distraught. Already needy, her latest catastrophe pushes her toward even greater reliance on her boyfriend (Jack Reynor).

Pugh's Dani feels abandoned when she learns that Reynor's Christian plans to travel to Sweden with friends to visit the commune where another friend (Vilhelm Blomgren) was raised. Reluctantly (and to the dismay of his male buddies), a guilt-ridden Christian invites Dani to tag along.

When the group arrives at the commune, their initial impression seems favorable. The members of the Swedish group all dress in white, freely dispense hallucinogenic drugs and seem like harmless (if slightly out-of-touch) flower children.

Aster slowly follows through on what we expect from the outset. He undermines the promise of a tranquil environment with a ritual of alarming (though highly predictable) lethality. When the group gathers for one of its rituals or even for a meal, the atmosphere turns austere and serious, so much so that the movie often becomes laughable.

Tensions within the American group punctuate the proceedings. Josh (William Jackson Harper), one of Christian's fellow students, argues with Christian about who's going to use this bizarre mini-society as the basis for a thesis.

All of this builds toward a finale that only the most gullible of viewers won’t suspect will be weird, brutal — and perhaps even repulsive.

Aster leaves signs of what's to come along the way: the weird shape of some of the wooden buildings and a pyramidal structure no one is allowed to enter. The visitors sleep in a dormitory-like hall where the sound of a baby's ceaseless crying can be heard at night. Did I mention the caged bear that resides in the middle of the settlement? Well, there is one. As you can tell, Aster points a large finger at his ominous target.

Lighting becomes one of Midsommar's distinguishing features. Most of the action takes place in the prolonged daylight of the Swedish summer. I’ve been in Sweden during the time when there’s little darkness and it can take some adjustment. In this case, the near-constant daylight creates a visual blandness that serves as an ironic counterpoint to the movie’s darker ambitions.

At two hours and 20 minutes in length, Midsommar takes too much time getting to the point, whatever the point might be. The movie's portentousness becomes oppressive.

For some, Midsommar’s violence, a bizarre sex scene, and a grotesquely punishing finale will be enough to turn thumbs downward. But for me, the most alarming thing about Midsommar is the distance it keeps from its characters. I didn’t fear for these characters but spent more time wondering just how Aster was going to wring a conclusion out of all the weirdness. Just how strange would things get?

The movie builds toward a May Day celebration that precedes a violent finale. Aster knows how to concoct bizarre images — the cult’s May Day Queen hauling herself around the village in a weighty cloak made of flowers, for example — but I couldn’t shake the feeling that all this weirdness was as hollow as the members of the cult that had produced it. Some of the images may linger in your head, but you also may find yourself asking what (if anything) can be derived from their presence?