Mark Maron heads a strong comic ensemble in a movie that builds its story around a preposterous idea. 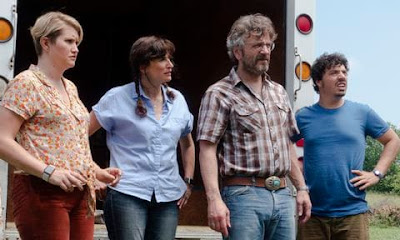 I wouldn't have thought it possible, but the low-key comedy Sword of Truth proves enjoyable, even though it lacks a strong payoff. Maybe that's the point, director Lynn Shelton's easy-going comedy makes excellent use of an agreeable ensemble of actors led by Marc Maron, who starred in the Netflix series Glow, some of which Shelton directed.

Shelton introduces us to a variety of mismatched characters. Maron plays Mel, a former drug addict who moved from New York to Birmingham, Ala., to straighten out his life. He now operates a pawnshop with Nathanial (Jon Bass), an assistant who provides little by way of actual help. You get the feeling that Mel keeps the young man around to ward off loneliness and to give him something about which he can complain.

While Mel toils in his pawnshop, Cynthia (Jillian Bell) shows up in Birmingham with her partner Mary Michaela Watkins). The couple hopes to inherit a house from Cynthia's recently deceased grandfather.

The women quickly learn that the house now belongs to a bank. A Civil War sword accompanied by certificates of authenticity constitutes the sum total of Cynthia's inheritance.

The women take the sword to Mel to see what it's worth. Mel eventually learns that the sword has value to a small group of folks who are dedicated to collecting items that prove an audacious claim: These nut cases believe the South won the Civil War.

Cynthia and her partner go into partnership with Mel. All are hoping to enrich themselves.

That's pretty much the story; it's just enough to allow Shelton's cast to fill in many blanks, much of the time with what appear to be improvisational riffs.

Maron tempers Mel's conniving and cynicism with vulnerability. He isn't afraid to make Mel look lost at times -- and the choice works in Shelton's favor.

The movie builds to a meeting between this unlikely quartet and a character (Dan Bakkedahl) who apparently will pay major money for the sword. Toby Huss has a nice turn as Hog Jaws, the middleman who sets up the big meeting at which the sword will be sold.

Shelton (Humpday, Your Sister's Sister, and Laggies) knows her way around this kind of loose-limbed comedy. She's also good at allowing bits to crop up in unexpected ways. When Nathanial tries to convince Mary that the world is flat, his sincerity makes for an amusing detour, even as the movie gathers a bit of satirical steam.

Initially, I was disappointed that Sword of Truth didn't have a bigger payoff. But you know what? On second thought, I had to admit that I had a fine time going nowhere with these feckless but funny characters.