Disney's new version of The Lion King has its moments, but too often fails to thrill. 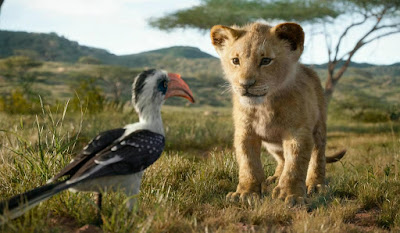 By now, The Lion King has gone far beyond being a much-loved 1994 animated movie from Disney. The celebrated King rules a brand-like realm of abundant profits -- in the form of a long-running Broadway musical, numerous touring productions and loads of international recognition.

Is there a person on the planet who hasn't uttered, either in seriousness or derision, the words "Hakuna Matata?” Who hasn't felt the manufactured awe that stems from hearing the lyrics to "The Circle of Life?"

Now comes Disney's eagerly awaited computer-animated version of The Lion King, which has been made to look as if real lions are living the story of Simba, the lion who wrestles with guilt over his father's death, flees the Pride Lands and eventually returns to assume his rightful place on the throne. (Spoilers, I suppose, but who doesn't already know the story.)

Me? I had a mixed reaction to the new edition. To begin with, the movie qualifies as something of a techno-curiosity. Disney's team of specialists has created a world in which (save for being able to speak English) the lions attain a level of faux realism (yes, it's a contradiction) that's striking.

Watching the beasts of Lion King feels a bit like something you might experience at a theme park that has been designed to simulate the feeling of traveling across an African savanna. No passports or inoculations required.

But there's a downside to this approach. The animals move their mouths when they speak but their faces aren't as free to express emotion as they would have been had they been drawn.

And all of the movie's animal characters romp across landscapes that also are rendered with keen realism. It's all supposed to look like "live-action."

For the most part, Favreau and his team follow the original story, so much so that some have criticized the movie for lacking freshness. But Favreau was in a no-win situation when it came to the story: Had he provided wholesale changes, he probably would have been criticized for tampering with a classic.

In trying to contain the story within clearly recognizable boundaries, Favreau has subjected himself to the opposite charge: The movie, some say, is a grandiose act of mimicry.

Audiences, I suppose, will fall on either side of the fence or won’t care at all.

The vocal talent in this edition acquits itself well: Donald Glover, as Simba; Chiwetel Ejiofor as the evil Scar, James Earl Jones, as the fallen King, Mufasa.

The film springs to its most vivid life when it’s being silly, especially when Billy Eichner (as Timon) and Seth Rogen (as Pumbaa) show up. The meerkat and warthog team provide laughs and an energy boost for a movie that can feel overly solemn, particularly when the story travels to a forbidden elephant graveyard.

Using realistic-looking animals for fights may shake smaller children, although these days I'm at a loss when it comes to understanding what level of mayhem little ones are able to tolerate. The many snarling hyenas that Scar recruits as henchmen in his plot to rule can be equally scary.

Speaking of Scar, the villain of the piece looks mangy and undernourished, a creature more in need of animal rescue than a throne that satisfies his greed, hunger, and ambition.

Some of the famous musical numbers survive but don't always make much of an impact. I guess the filmmakers thought that audiences are familiar enough with these songs immediately to grasp their significance.

And, yes, the cub Simba is cute enough to win over even the hardest of hearts.

This edition of Lion King should keep the turnstiles spinning, even if its sense of discovery stems mostly from the ways in which everything has been so sharply realized. If you wanted to push the point, you could say that the whimsy of animation has fallen prey to the sharpened incisors of technical achievement.

Still, I said my reaction was mixed and I’m not changing my mind: The story's appeal remains — even if this Lion King doesn’t always thrill.