When a lie soothes the way

In The Farewell, a granddaughter confronts her grandmother's fatal illness. 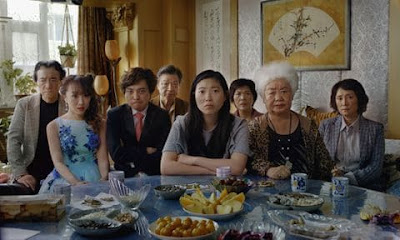 The story of American immigrants can be twofold as pathways of opportunity bump against profound feelings of disconnection -- from old ways and especially from family members who stayed behind.

The Farewell, a movie from director Lulu Wang recognizes the split and finds it most vividly represented in the presence of Billi (Awkwafina), a dejected young woman who returns to China to visit her grandmother (Zhao Shuzen), a woman who has been diagnosed with stage-four lung cancer.

The movie revolves around a secret. Shuzen's Nai Nai hasn't been told that she's dying. Her family decides to allow her to live out her days without knowing that she's been given a death sentence. The need to protect Nai Nai from medical truth pushes the other characters into uncomfortable territory.

Billi, in particular, wonders whether the lie doesn't mask an element of cruelty. Isn't Nai Nai entitled to know her fate?

Oops. I'm making The Farewell sound like a sad family drama that puts its characters through a series of emotionally wringing scenes.

This is not the case. Wang, who based her movie on her own experience, walks the fine line between comedy and drama, mostly navigating her way past any jagged cliffs that could have upset the movie's balance.

The movie opens in New York. Billi's parents (Tzi Ma and Diana Lin) don't want their daughter to make the trip to China, a visit that's being organized around the impending wedding of a cousin (Han Chen) to a Japanese woman (Aoi Mizuhara) who seems totally lost amid her future Chinese relatives.

Billi's mother thinks her daughter is too much of a cynic -- not to mention a downer -- to travel to China for a mission that requires a high-degree of happy pretense. Everyone's attending a wedding, but everyone also knows the real reason for the visit: to say goodbye to grandma. After her parents depart for China, the strong-willed Billi follows.

Other members of the clan include Nai Nai's son (Yongbo Jiang) who works in Japan and who explains to Billi that the lie isn't selfish: It's told so that Nai Nai's relatives can carry the burden of grief and suffering for her, he says. Suddenly, the family's behavior makes sense.

For her part, Nai Nai is a good-spirited woman who practices Tai Chi and who freely dispenses advice to those who may or may not want it. She's concerned about Billi's marital status (single) and so genially intrusive that we're never put off by her.

Credit Zhao with a galvanizing performance that works well with Awkwafina's low-key brooding, a stunning contrast with her live-wire work in the more glamorous and overtly commercial Crazy Rich Asians.

Set mostly in the Chinese city of Changchun, Wang can't resist the opportunity for a bit of social commentary, offered without underscoring when she focuses her camera on the vast, faceless apartment dwellings that have replaced the city's cozier neighborhoods.

Nai Nai herself lives in a new building; the neighborhood of Billi's memory has vanished. Billi was taken to America at the age of six and in a touching scene, she talks about the help she needed to adjust, which her mother couldn't provide. Still, the relationship between Billi and her parents remains a trifle under-explored.

Much of the family interaction takes place around meals, which allows Wang to bring out the personalities of the family: She treats various customs (posing for wedding pictures, for example) with comic affection.

The Farewell focuses on a family fractured by emigration but still inescapably a family -- with all the tensions, love, accusations and regrets that go with it.